While Mexican lime volume has been inconsistent this spring, prices have been steadily below average, offering buyers a good opportunity.

No doubt, the lack of foodservice buyers has kept the market depressed, as an already low average price dropped nearly in half since mid-March, when many shelter-in-place orders began across the United States.

High availability of product in 2020 has led to lower prices when compared to previous years, according to analysis from Agtools.

When the crisis started, the price adjusted down to $10 in April 2nd, and after that it began to recover to $15. At the end of last week, it fell back to $12. It appears this price will stabilize at between $12-16.

Agtools reports that terminal market prices have also been very depressed this year compared to 2018 and 2019, and it is also related to the available volume. In the Chicago terminal market, prices from mid-February to mid-March increased from $15 to $36. The market has been very erratic, but it is beginning to stabilize between $22-26 per case. Lower prices this year versus previous years seem to be due more to market conditions than to the global crisis. 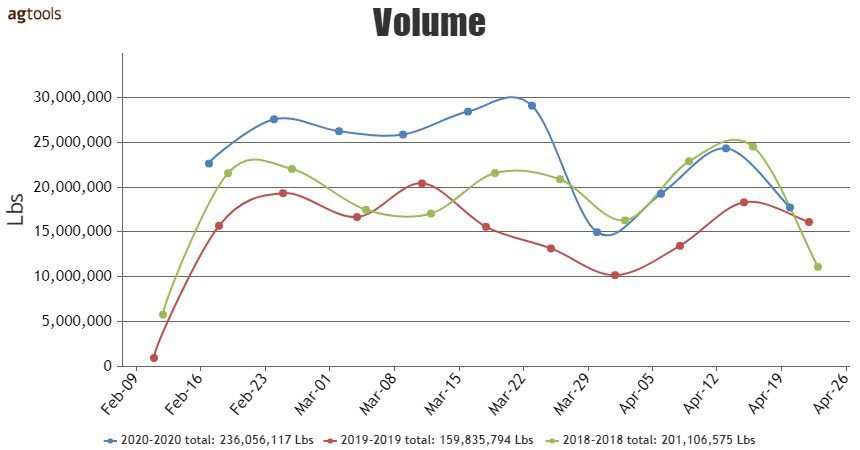 The total volume for the Persian lime this year has been much higher when compared to 2018 and 2019, Agtools said. It peaked in week 13 at 28 million pounds for the week and then fell drastically in week 14 to half of the weekly volume, right as governments closed many businesses during the pandemic.

The volume recovered with two consecutive weeks of increases reaching 24 million pounds for the week. The volume was noteworthy given we are in a crisis and despite having fallen again last week. It appears the volume will recover to previous market levels in a short period of time. The total volume moved during this period has been 48 percent higher than 2019 and 17 percent above 2018.