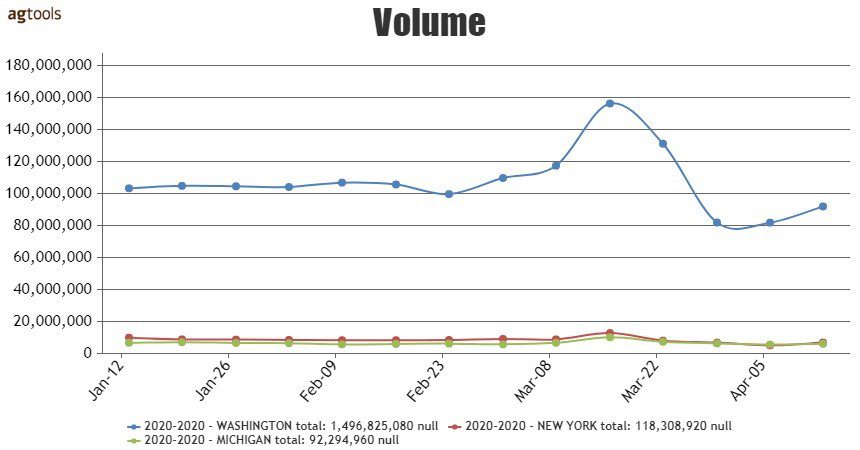 Apple volumes are returning to normal levels after a panic-buy surge and then slump in March.

Apple prices never saw the dramatic crash in mid- to late March that so many other fruits and vegetables saw as restaurants and institutions closed, and American consumers turned primarily to retail to feed themselves and their families. 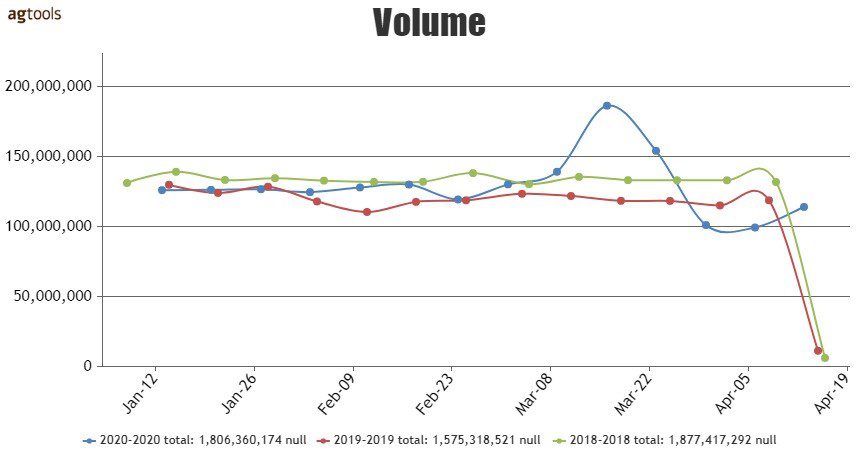 While this year’s volume was slightly above 2019 but lower than 2018, overall volume was fairly similar for all three years. Volume for 2020 was fairly stable through the beginning of March, when it started increasing due most likely to a crisis induced panic buying and peaked at 186 million pounds per week on week 12, said Raúl López, an agronomist at Agtools.

The following week volume began to drop again and continued the trend through the first week in April. By week 15 demand fell by 20 percent compared to 2019, at 99 million pounds per week. A slight recovery may be on the way, based on the latest available data. Even with the effect of the current crisis, total volume from January 13th through April 19th is 1.2% higher than 2019.

The Apple market from January through April has been supplied by three main regions which together accounted for 94 percent of the volume. Washington was the largest producer at 83 percent, followed by New York at 6 percent and Michigan at 5 percent.

The largest producing region also experienced the largest downward impact to its volume, with a steep decline between week 12 and week 15 in Washington production, Lopez said.

F.O.B. prices for Washington Royal Gala apples, size 72s, point to a fluctuating trend between $20-24 per case on the low side and $24-30 per case on the high side, Lopez said. Generally, F.O.B. prices have not been affected by the crisis. It is important to remember that this commodity can be stored for a period longer than other commodities without losing quality, he said.

Prices for 2020 in the New York Market have been steady at $32 per case for about two months, Lopez said. However, for the same periods in the prior two years prices fluctuated significantly.

Starting on the third week of March 2020 and through the first week of April there were no price quotations as a result of the COVID-19 crisis. Pricing resumed the second week of April, reporting higher prices than in March. Current prices are $38-40 per case and the prices have held stable at that level through last week.

This graph represents the monthly exports from the Tacoma Port to Asia since January 2017 through January 2020 in dollar value, Lopez said. The highest amount was in October 2017 when it peaked above $44 million. After that month, we can see a downward trend every year. The Asia market is decreasing over these three years, and 2020 will likely continue this trend as the pandemic has affected global markets.