Stronger pricing has returned to the asparagus market, as volume has had a more dramatic drop.

Mexican asparagus had a stronger early spring than the last two years as volume peaked with more than 25 million pounds shipped the week of March 8. Shipments typically drop off as Easter orders are made, but this year the pandemic shut down restaurants in mid-March, and asparagus volume dropped faster than normal years with no demand from that side of the market.

Since the beginning of April, prices have been on a steady rise, suggesting retail demand exceeds volume. 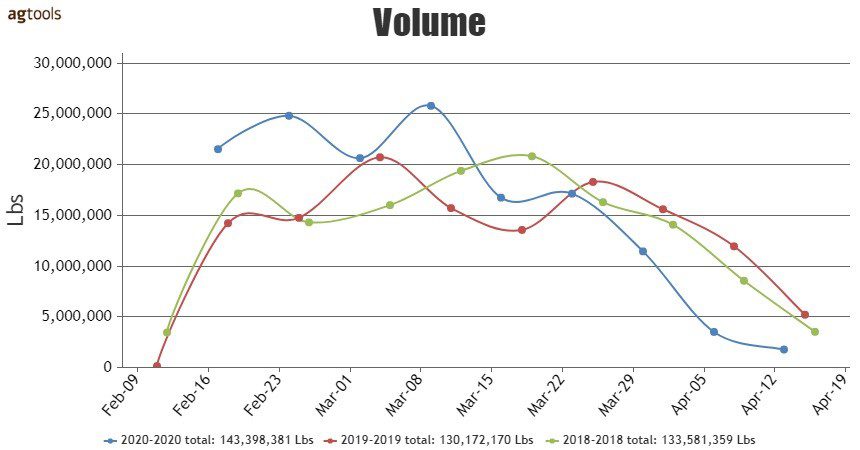 Nearly all U.S. asparagus this time of year comes from Mexico, which is beginning its transition to Baja California.

“Last week we observe a slight recovery which may signal the downward trend will not continue. We expect the volume to start increasing in the next two weeks, even though the total volume for this period remains similar to previous years,” said Raúl López, an agronomist at Agtools.

Prices in March were below the past two years, averaging $6.75-9.75 per case of large size, but the market was stable through late March, when supplies dropped so low, prices were no longer tracked, Lopez said.

“On April 9th, after a few days without product, the prices began to climb and fluctuated between $12.75 and $16.75,” he said. “At the end of last week, the price peaked at $26.75, with small volume available. We expect prices will continue to increase during the present week. It will be very interesting to see how this commodity behaves during the continuing crisis.”

Lopez said has he expected, the terminal market in Los Angeles reflects the F.O.B. prices.

“February was strong, and then in March, prices dropped and kept steady until March 31,” he said. “After that, with a very small volume available, the price started climbing every day, from a range of $8-10 in April 1st to $24-2 on April 16th. A continuance of price increases is expected should supply remain below demand.”