Many fruits and vegetables saw plummeting demand followed by lower volumes as most Americans sheltered-in-place, panic bought at grocery, and then showed little demand with restaurants and institutions closed.

But not avocados. Volumes and prices began to decrease in mid-March, but not nearly as dramatically as many other crops, and some strength is returning a month later, according to analysis from Raul Lopez, an agronomist at Agtools.

Blue Book has teamed with Agtools Inc., the data analytic service for the produce industry, to look at a handful of crops an how they’re adjusting in the market during the pandemic.

Prices during mid-February for Mexican avocados size 48s F.O.B. from McAllen TX, were a lot higher than the two previous years, Lopez said.

“They were above $50 per case and had an increase in the week of March 16th that reached $60 per case,” he said. “After March 21st, the prices started decreasing, but not as drastically as other products. On March 31st, prices stopped falling and reached $38. Last week showed a little recovery.”

At this point in the spring season, Mexico represents 90 percent of the market in the U.S., with Southern California at 3 percent and Dominican Republic 2.5 percent. The rest is from Florida, Peru and Chile. 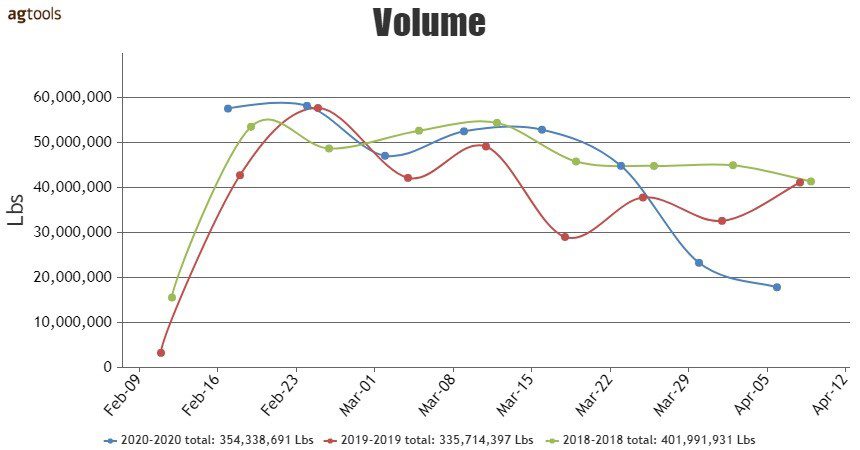 During mid-February, the behavior of the market for avocados was very similar to the past two years, with ups and downs after the Super Bowl, Lopez said.

“However, after March 15th the market presented a deep downward trend due to the public health emergency, and hit floor by the end of March,” he said. “For the first week of April, it started showing a recovery trend.”

Even with this loss of momentum in volume, the total volume for this period is 18 million pounds above 2019.

In the New York terminal market, February and March saw higher prices for avocados, until March 22, when the pandemic took hold and many fruits and vegetables saw dropping demand.

“Up and down behavior has been present until April 5th when it hit bottom at $25,” Lopez said. “Then last week prices started climbing and ended the week at $50. This price is higher than 2018 but still lower than 2019.”