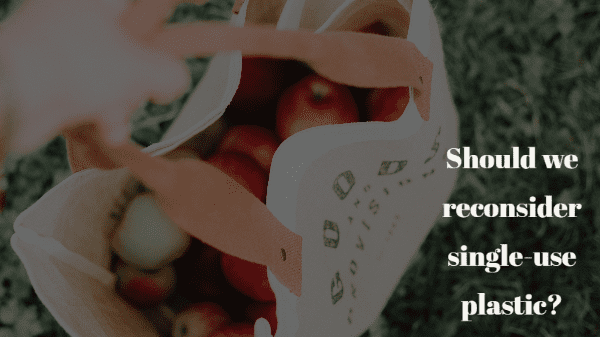 For a whole summer, our car smelled of garlic.

We cleaned the car out, took out all garbage, looked under the seats. But still the odor lingered. It didn’t smell bad or rotten—it just smelled of garlic.

After several weeks, we tracked down the culprit. It was a head of garlic that someone had forgotten to take out of a reusable cloth bag. The garlic still looked good, but we threw it out away.

As you can tell, our family tries to be conscientious about using reusable bags when we go grocery shopping, although this incident shows that the practice has its pitfalls.

Like everything else, reusable bags have come under scrutiny in the time of the coronavirus. A couple of weeks ago, I brought some to Target, and the clerk made me fill them myself.

That’s it for reusable bags, I decided, for the rest of this crisis.

Many government leaders are making the same decision. Maine was supposed to put a plan on single-use plastic bags in place on Earth Day, April 22, but has delayed implementation until January 15, 2021. Even San Francisco, which, according to The Wall Street Journal, implemented a ban on plastic bags thirteen years ago, reversed it on March 31.

Six other Bay Area counties have implemented the same policy.

At present, eight states—California, Connecticut, Delaware, Hawaii, Maine, New York, Oregon, and Vermont—have banned single-use plastic bags, but many are reconsidering that ban, at least for the time being. Massachusetts doesn’t have a statewide ban, but Governor Charlie Baker has overturned 139 municipal bans throughout the state.

Is there a real danger? One frequently cited 2011 study concluded, “Reusable bags were collected at random from consumers as they entered grocery stores in California and Arizona. In interviews, it was found that reusable bags are seldom if ever washed and often used for multiple purposes. Large numbers of bacteria were found in almost all bags and coliform bacteria in half. Escherichia coli were identified in 8% of the bags, as well as a wide range of enteric bacteria, including several opportunistic pathogens. When meat juices were added to bags and stored in the trunks of cars for two hours, the number of bacteria increased 10-fold, indicating the potential for bacterial growth in the bags. Hand or machine washing was found to reduce the bacteria in bags by > 99.9%.”

But the study merely recommended that consumers wash their bags rather than forgoing them.

These findings reveal the presence of bacteria, not viruses. Public policy in the time of coronavirus seems to be based on playing it safe rather than actual science. One study reported in The New England Journal of Medicine found that the virus was more stable on plastic and stainless steel than on copper and cardboard, but it did not examine the virus’s stability on cloth.

Individual store policy continues to tighten. On March 31, Yahoo! Finance reported that Target implemented a ban on reusable bags (my trip was before then). Costco has followed suit: today clerks in the Bloomingdale, IL, store told me they were not allowed to touch anything that had come from outside (although, of course, they still have to handle members’ cards).

According to ABC News, Hy-Vee banned reusable bags in March. The Orange County Register reports that Trader Joe’s has not only banned reusable bags but has removed charges for bags provided by the store (mandated by the State of California). Other Southern California markets are allowing customers to bring their own bags but is requiring customers to fill them themselves.

Will states return to their formerly friendly policies to reusable bags? The plastics industry would rather they didn’t . On March 18, Tony Radoszewski, CEO of the Plastics Industry Association, sent a letter to the Department of Health and Human Services, asking that “the department speak out against bans on these products [single-use plastic bags] as a public safety risk and help stop the rush to ban these products by environmentalists and elected officials.”

As I’ve said, I’m forgoing reusable bags—no matter what store policies say. Do I seriously believe that the bags will spread coronavirus? Not in the slightest.

But I also believe that at this point panic is at least as grave a danger as the disease itself, and I don’t want my bags striking terror into the hearts of fellow shoppers or clerks.