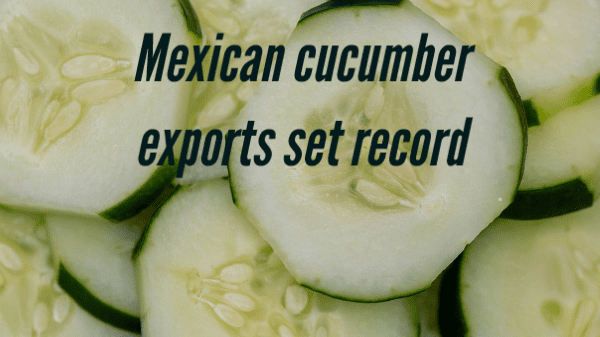 In 2019 Mexican cucumbers and pickles combined reached a new record in exports to the United States of 776,000 tons, with a value of $587 million, representing a 2.4 percent increase in tons and a 7.9 percent increase in dollars, as reported by Opportimes, a Mexican news reporting agency.

On a global level, Mexico is the third in exports, behind Spain and Netherlands.

More than 98 percent of Mexican exports went to the U.S., while 1.2 percent went to Canada. Canada is also a notable exporter with sales of $281 million, a 6 percent annual increase.

Cucumbers are often eaten like vegetables, but scientifically they are considered a fruit as they contain seeds and develop from a flower. Cucumbers, melons, pumpkins, and watermelons are all part of the Cucurbitaceae family, which are vine crops that can be grown on the ground, on posts, or trellises.

There are over 100 varieties of cucumbers which come with seeds, without seeds, and in mini.