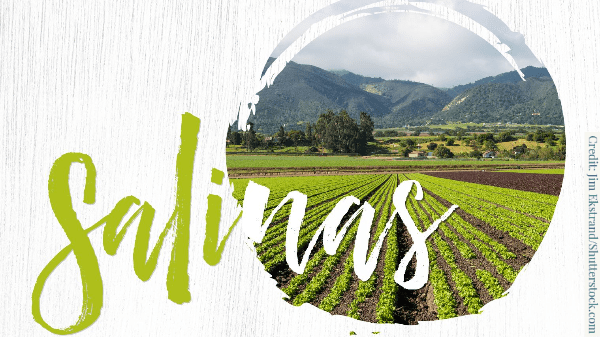 When you think of the Salinas Valley in literature, the first figure who comes to mind is the great novelist John Steinbeck. Many of his most important works are set there, and there is probably no other writer who have more powerfully expressed the region’s dynamic spirit.

East of Eden
Steinbeck’s 1952 novel East of Eden (later made into the film starring James Dean) begins with a geographical description: “The Salinas Valley…is a long narrow swale between two ranges of mountains, and the Salinas River winds and twists up the center until it falls at last into Monterey Bay… The floor of the Salinas Valley, between the ranges and below the foothills, is level because this valley used to be the bottom of a hundred-mile inlet from the sea.”

Although much has changed since Steinbeck’s time, the geography has not. The region’s proximity to the sea—the city of Salinas is about fifteen miles inland from the Pacific—makes the climate extremely temperate, sparing the region from the fierce summer heat of the San Joaquin Valley further east. For this reason, the Salinas Valley is ideal for growing leafy greens, especially lettuce, enabling the valley to style itself as “the world’s salad bowl.”

Like California as a whole, the Salinas area prides itself on innovation. Christopher Valdez, president of the Grower-Shipper Association of Central California BB #:162651, stresses, “The Salinas Valley region is innovative and unique, not only due to the technologies employed here daily to grow, harvest, and process produce, but also to the diversity of products and the sense of community pride around our industry.”

Lettuce is highly perishable, and that is one, though only one, reason it has been called “the gambler’s crop.” A hundred years ago, at the time when Steinbeck’s novel is set, uncertainties were a bit different than they are today—with shipping, for example.

In one memorable episode of East of Eden, the hero, Adam Trask, has a clever idea: to ship fresh lettuce by freight rail to New York. Despite naysaying (“People in the East aren’t used to vegetables in the winter”), he pulls the project together. “Businessmen spoke of him as farseeing, forward-looking, progress-minded. The departure of six carloads of lettuce was given a civic overtone.”

Fortune does not favor Adam Trask. The train hits delays from the Sierras to Chicago so that “what arrived in New York was six carloads of horrible slop with a sizable charge just to get rid of it.”

Steinbeck’s fiction is rooted in fact. Many carloads of lettuce experienced the same fate before the first successful transcontinental shipment in 1919. After that, the trek became routine, and the shipping method gave a new name to crisphead, the leading lettuce variety, which today is called “iceberg.”