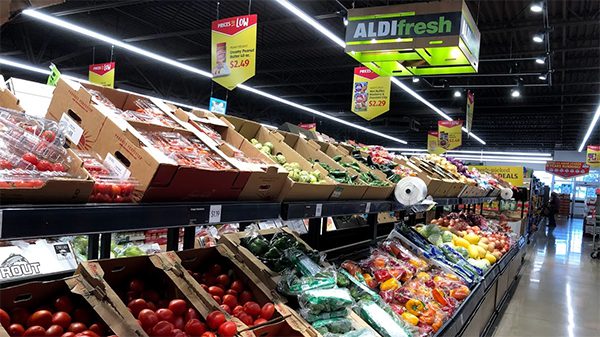 I made sure to bring a quarter.

My objective in this expedition was to see if I like Aldi BB #:116756 any better than I have in the past. Whenever I have set foot in an Aldi, I’m overwhelmed by the same impression (correct or not): this is an American supermarket designed by someone who has never set foot in the United States. And for whatever reason, I’ve had the impulse to buy little or nothing there.

I hadn’t been in an Aldi for a couple of years. But I had heard things about great improvements—especially to its produce section—so I thought it was time to revisit my opinion.

Of course, you have to deposit a quarter in a slot to release a shopping cart. In a way it’s sensible: the parking lot isn’t cluttered. On the other hand, you’re supplying the labor that they would otherwise have to pay for, in having someone go out and corral the carts.

Since no other American retailer—no matter how bare-bones—has adopted this practice, I have to wonder how much it really saves and how much it’s supposed to just give you the impression of saving.

The produce section of the two Aldi stores I visited—one in Bloomingdale, IL, and the other in Carol Stream, IL—was much improved over my memories of my previous visits, when I remember seeing little more than a half-dozen bins of sad-looking potatoes, onions, and other items that don’t perish quickly.

Produce prices were good, though they weren’t uniformly better than either at the Costco BB #:150902 next door to the Bloomingdale Aldi or at a Jewel in Carol Stream.

At this point in mid-February, for example, Cuties citrus are pretty much going to be 99 cents a pound, however boxed or bagged.

Overall, then, when it comes to produce, in my experience, Aldi and Costco are comparable and, as far as price is concerned, better overall than Jewel.

But of the three, I far prefer shopping at Costco, with its larger and more appealing selection. (It’s true, of course, that Costco’s large quantities aren’t always an advantage when you’re buying perishable items.)

In the end I dutifully returned my shopping cart (empty—I didn’t buy anything) to its place in the rack and got my quarter back.

My verdict? Aldi’s has improved but hasn’t fundamentally changed.

I could see shopping there if you have to watch every last penny—although even then, your best bet is probably to pick and choose among the specials at several different stores.

In the end, Aldi still seems to me as it always has—as a weird slice of Central Europe set down in the American retail landscape.

But then I may not be part of Aldi’s demographic. I guess it’s just going to keep its place in my mind as the bizarro supermarket chain.