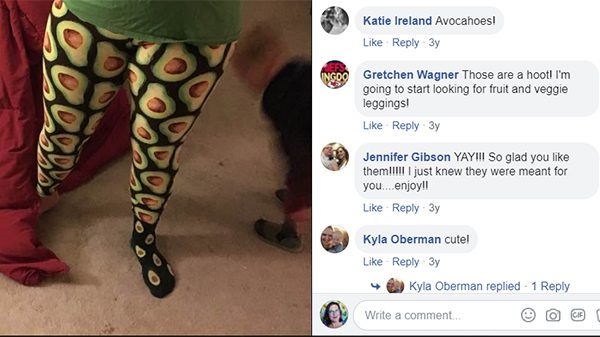 How has it only been three years since Jen blessed me with The Avocado Leggings?

I started wearing silly produce t-shirts in my early days in the business, but I kept it to travel days and less formal functions.

I’ve always struggled with dressy attire, and feeling like I was wearing a costume rather than being “professional.” In 2015, I struck gold at a thrift store and found a business shirt with apples on it and wore it to a few industry events.

Would it surprise anyone to learn I was voted “Most School Spirit” in my senior year in high school?

I started searching for other produce attire and came across an amazing vegetable dress that I wore for some professional portraits, but I didn’t really have a “signature look.”

That is, until an envelope with no name on the return address showed up at my house in late 2016.

It contained The Avocado Leggings, and nothing else.

They were a thing of beauty. There’s just something about the pattern that made them exceptional. I was a little shy about wearing them out of the house at first, but I went for it and picked my son up at school with them on one day.

At least five people commented that they love them.

I decided to go ahead and go for it and wore them during the trade show at the Southeastern Produce Council’s Southern Exposure in 2017.

They were a hit. So much of a hit that I wore them to Viva Fresh.

And then United, and at United, I added a twist. I grabbed as many avocados I could carry at the end of the show, intending to drop them off at a satellite office for my then-coworkers in Chicago. They weren’t available, so I had a sack of avocados and a flight delay at the airport.

I tweeted about it, and said everyone who found me could have an avocado.

The Avocado Leggings have become my trade show signature, so much so that I feel like I have to wear them at least once or I disappoint people. I’m actually on my third pair of the limited-edition print, which was only sold online.

It took me a few days to figure out who I knew who would send me something as amazing as The Avocado Leggings.

I actually wore them the last day of Fruit Logistica in Berlin on February 7. That night, I learned the person who sent them to me passed away the same morning.

Many in this industry will remember Jennifer Poulson Gibson for her megawatt smile and infectious joy.

She was most recently a business development manager at AMC North America, and has also worked in the Northeast for Frieda’s Specialty Produce and Oppy.

The Avocado Leggings bring joy to so many people, just like Jenn did.

We meet people and build amazing relationships in this industry. Even when you only see each other every few months or once a year, we all feel so close.

I’m glad I was wearing The Avocado Leggings last time I saw Jenn, at PMA’s Fresh Connections Retail in Philadelphia. I could tell something was wrong, but didn’t push. Jenn was a private person and chose not to make her battle with cancer public.

I’m so glad I was wearing The Avocado Leggings.

I will always wear The Avocado Leggings.