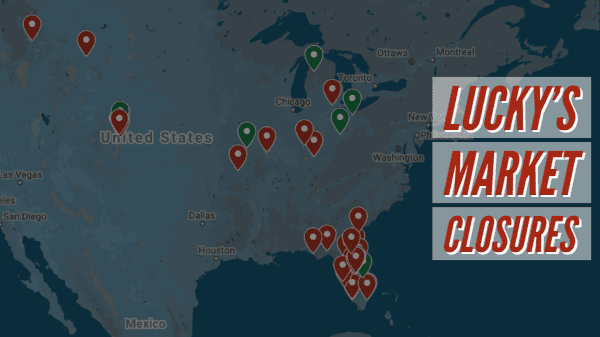 (By Pamela Riemenschneider) Lucky’s Market announced plans to close 32 of 39 stores, and now plans to sell the remaining seven amid Chapter 11 bankruptcy.

Just over a month after Cincinnati-based Kroger Co. BB #:100073 announced it was pulling its investment in Niwot, CO-based Lucky’s Market BB #:288938, a small format specialty grocer is closing 82% of its stores.

Lucky’s was founded in 2003 in Boulder, CO. Kroger first invested in the company in 2016, when it had 17 stores. Over the next three years, the company’s store count increased to 39, with most of the growth in Florida, including a new distribution center that opened in the fall.

Kroger announced in its third quarter earnings report in December that the relationship wasn’t working and that it was exiting the investment.

“We just didn’t think it created a good return for the investments that were needed to be made relative to that,” said CEO Rodney McMullen, during the company’s earnings call in December.

Lucky’s employees were reportedly told about impending closures during 7 a.m. store meetings on January 21, and consumers were informed on social media of impending store closures.

Of the 39 stores the company operated, seven reportedly are staying open, according to social media and news reports: