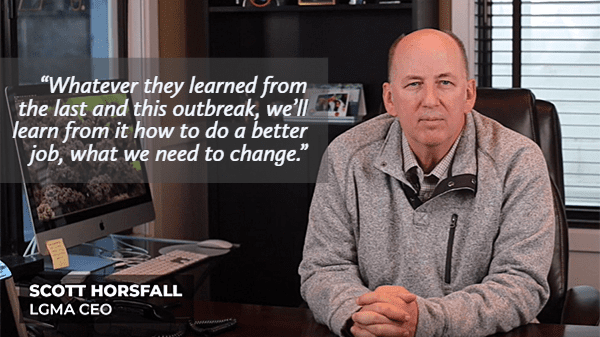 In the aftermath of another E. coli outbreak associated with romaine from the Salinas, CA, area, Scott Horsfall, CEO of the California Leafy Greens Marketing Agreement (LGMA), said growers will learn and get better.

“Whatever they [investigators] learned from the last and this outbreak, we’ll learn from it how to do a better job, what we need to change,” he said December 10.

Horsfall said the outbreak linked to Fresh Express salad kits doesn’t appear to be the same as either earlier romaine outbreaks. The Salinas area hasn’t shipped romaine since the advisory November 22.

There is no advisory on any romaine from growing areas producing in early December, including Yuma, AZ; Imperial Valley, CA; or Mexico.

Horsfall said last year’s FDA advisory right before Thanksgiving to avoid all romaine led grower-shippers to label all packages with the growing region, and that has helped keep everyone informed better this year.

The LGMA released this statement December 10:

Public health officials in Canada and the U.S. are investigating an outbreak of E. coli O157:H7 linked to a packaged salad mix. The salad mix contains several ingredients, including a number of leafy greens varieties.  It has not been determined what ingredient in this salad mix is the source of the outbreak. At this time, officials do not believe this new outbreak is part of the larger outbreak linked to romaine grown in the Salinas region.

Consumers are being advised not to eat Fresh Express brand Sunflower Crisp Chopped Salad Kits with UPC 0 71279 30906 4, beginning with lot code Z, and a best before date up to and including December 7, 2019.

To date, 16 illnesses in Canada and 8 in the U.S. have been linked to this salad mix. The last reported illnesses in this outbreak occurred November 15 and suspected product is likely no longer available for sale although it may still be in consumers’ homes.

Although this outbreak and the one associated with romaine grown in Salinas do not appear to be caused by the same e. coli strain, the timing of the illnesses is similar in both outbreaks. If this new outbreak is found to be associated with lettuce, the LGMA is hopeful that investigations of these incidents will provide additional clues on how future outbreaks can be prevented.

As always, our thoughts are with those who have been sickened in this outbreak. If this outbreak is determined to be associated with leafy greens, we will use information gained from investigations to help improve the safety of our products.