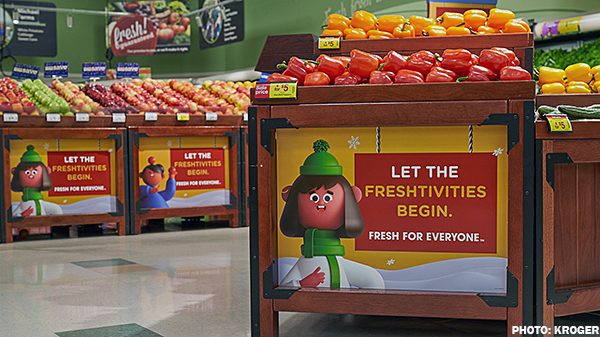 Cincinnati-based Kroger Co. BB #:100073 had a big quarter when it comes to new initiatives, and fresh produce played a vital role for the company.

“Our produce department led the way in sales for the quarter, demonstrating how our store teams are focused on improving everyday execution in ways that are highly relevant to our customers,” said CEO Rodney McMullen, during the company’s third quarter earnings call on Dec. 5.

During the quarter Kroger launched its new Fresh for Everyone strategy, which McMullen says is getting positive feedback from customers.

But the big news in the earnings report was Kroger’s decision to withdraw from Boulder, CO-based Lucky’s Market.

Kroger invested in Lucky’s in 2016, when the small format retailer had 17 stores. As recently as August, Lucky’s announced it would start carrying Kroger’s private labels in its stores. The company also opened a new distribution center in Florida this fall.

“We just didn’t think it created a good return for the investments that were needed to be made relative to that,” McMullen said. “So, it was really driven by narrowing our focus and the additional requirements to make it something that would be meaningful to Kroger.”

When pressed by an analyst about apparent successes, particularly in fresh produce at Lucky’s, Gary Millerchip, Kroger’s senior vice president and CFO, said the company’s economic investment without profit is about $131 million. The limited assortment and small format wasn’t a good fit for Kroger, he said.

“We do believe that there’s still a role for the small format store,” he said. “I think it’s certainly proven. And I think it’s still probably to be proven in the industry about what is the right model for a smaller format store and how do you make that economic model work and how do you connect with the customer in a way that drives the right value on those smaller shopping trips as well,” Millerchip said. “We’re providing a far more comprehensive level of experience for that customer than ever before and continue to do more of that as we continue to build out the strategy beyond freshness and connecting with our loyal customers.”