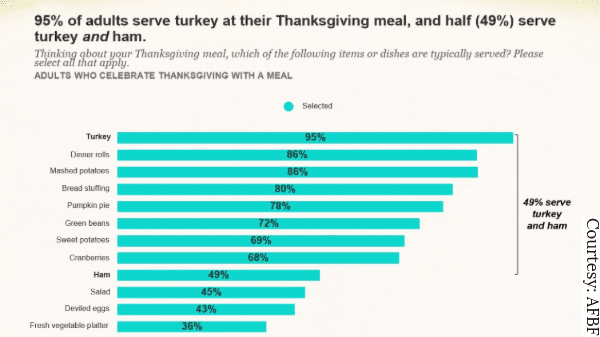 The Thanksgiving meal this week remains a great American tradition.

The American Farm Bureau Federation’s 34th annual survey of traditional Thanksgiving menu items shows a 1-cent rise from last year to $48.91 or less than $5 per person.

Seeing as how the holiday is very traditional for most families, the dinner menu is as well. After the 16-pound turkey in the survey, veggie tray, green peas, fresh cranberries, russet potatoes and sweet potatoes appear.

Potatoes, green beans, sweet potatoes, and cranberries are all typically served at more than half of Thanksgiving gatherings, according to the survey.

Fresh produce marketers should be proud their products feature so prominently in such an important event to most American families.

But we take a step back from turkey.

It’s good to keep these big picture behaviors in mind. With 86 percent of consumers eating mashed potatoes at a holiday that nearly all 300-plus million Americans celebrate, that’s truly in the mainstream.

That got me thinking about the rise of plant-based meat alternatives and a column I read about the future of food.

In his column, just-food.com columnist Victor Martino talks about a recent panel he covered in San Francisco, where leaders of plant-based foods such as Impossible Foods and other food activists predict the future of food will move away from animal-based to plant-based because of environmental and other sustainable reasons.

His conclusion is that while technology will continue to play a bigger role, the future of food will look much like it does today.

I agree, and I think the 95 percent of people eating turkey and 86 percent eating potatoes will agree.

There certainly will be some eating habit changes we won’t anticipate, and all of us in the fresh produce business hope that means increasing consumption of fresh fruits and vegetables.

But the percentage of vegetarians in the United States hasn’t changed from 2 to 3 percent for decades.

We will still be eating and enjoying meat for many more generations—and this shouldn’t bother the fresh produce industry when it’s such an important part of American family traditions.