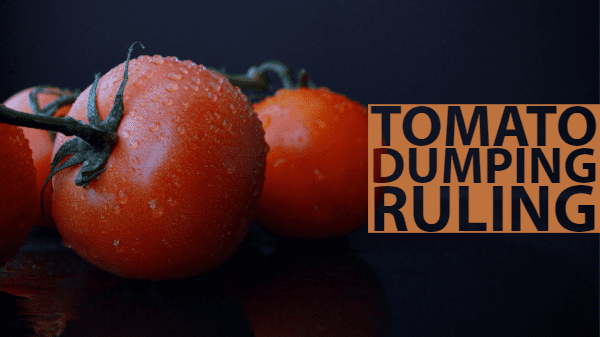 The unanimous decision today follows a U.S. Department of Commerce determination last month that found Mexican tomatoes have been dumped in the U.S. market at an average margin of 21 percent less than fair value.

The Florida Tomato Exchange BB #:162441 said, “These rulings validate the U.S. industry’s long-held claims about dumped Mexican tomatoes. The ITC will formally issue its determination on December 9, which will mark the end of the antidumping investigation that began in 1996.”

“The Florida Tomato Exchange hopes that this new reality will instill discipline among exporters and importers of Mexican tomatoes so that they will not attempt to circumvent the rules of the suspension agreement.”

“The new agreement provides a level of certainty that has that has been lacking over the last couple of years on both sides of the border, and we hope all parties can now focus on complying with the terms of the new agreement,” said Michael Schadler, Executive Vice President of the FTE. “We will remain very engaged with the Commerce Department to ensure that the inspection and compliance provisions of the new agreement are being followed and enforced properly.”

The Nogales, AZ-based Fresh Produce Association of the Americas BB #:144354 said it is disappointed that the ITC “failed to recognize that the growth of Mexican tomato imports is due to U.S. consumer preferences and U.S. companies seeking out the best varieties and growing regions to meet these demands.”

“Companies across North America have been importing tomatoes from Mexico for over a century. U.S. importers have worked with their North American customers to create a category of tomatoes highlighted by superior quality, flavor and consistency of supply. Today’s ruling will not change this,” said FPAA President Lance Jungmeyer.

“Consumers prefer vine-ripened tomatoes, and this is why domestic gassed-green tomatoes continue to lose market share. We are disappointed that the USITC failed to recognize this simple reality,” Jungmeyer said.

The FPAA confirms the Tomato Suspension Agreement remains in effect.

“The FPAA continues to work closely with its members to implement and fully comply with the new agreement,” it said in a statement.