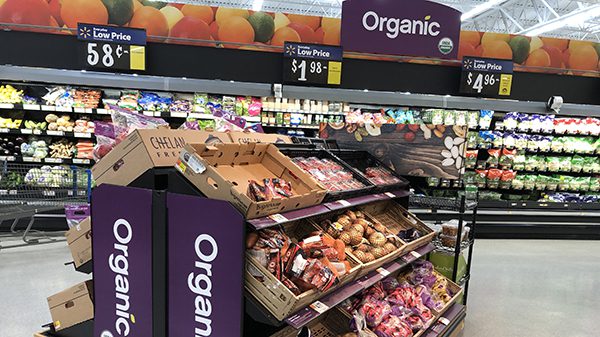 This is Walmart’s new Organic Shop, aimed at shoppers who prefer to buy their organic produce from a separate section.

When I first heard about Walmart’s Produce 2.0 initiative, I listed five improvements I’d like to see in yet another sweeping overhaul of the company’s produce operations.

The company expanded on the program in a blog post yesterday by Charles Redfield, Walmart U.S.’s BB #:143789 executive vice president of food. I read through the post, which mentioned segregated organics, an open air market feel, more space for shopping (isn’t that an open market feel?), and new signage.

The changes, Redfield said, are for associates as well as customers:

We are just beginning to renovate the departments with plans to update the majority of stores by next summer. Many others will be renovated as part of remodels.

The changes we’re making to our produce department will be great for our customers and associates, and we’re excited to bring them to stores all around the country.

I read through the list and thought, “Hey, wait a minute. I’ve seen some of this already.”

The two stores closest to me have had a few upgrades, though I wouldn’t call it an overhaul. I did, however, catch an overhaul in progress on a recent trip to Bastrop, TX. I had the pleasure of spending about three hours stranded at Walmart waiting on a car battery warranty issue.

The store was in chaos. Associates were busy packing up entire departments to shift them to other areas. Signage was everywhere indicating imminent improvements.

The produce department, however, was already done and it looked NICE.

The new low table strategy looked plentiful and it lacked the redundant displays. There were still out of stocks, but they were minimal.

This department was a showcase.

At my Cedar Park store, however, we’ve gotten about half of the overhaul. It’s like Produce 2.0 beta test version.

It has separated organics, more low quad tables, and new signage including employee picks, which I love.

But we also have some stock issues. There were what I can only describe as immortal California peaches and a shocking dearth of citrus (particularly mandarin oranges and local Texas citrus,)

The other thing that’s coming with these renovations is something Walmart’s not really publicizing. At both the Cedar Park and Bastrop stores, they’ve added one-way gates to enter the store, and they’ve replaced the friendly retiree door greeters with a harried, apologetic receipt checker.

These new “features” are not going over well with the peanut gallery that is my neighborhood’s Nextdoor group.

The latest gripe says “DO I LOOK LIKE A THIEF?” and has approximately 100 comments, including this gold, “Who do they think they are? Costco?” 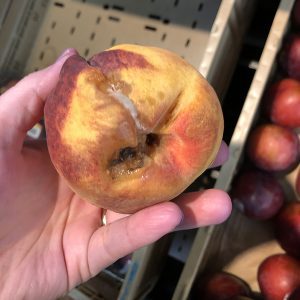 Out here in the suburbs, we aren’t used to one-way gates to get in stores. I’ve seen them all over Europe and in inner-city locations. It’s a little shocking, to say the least.

I’ve said it before, and I mean it. I want Walmart to succeed in produce. But every time I get my hopes up that in-store execution will change, I come across empty shelves and rotten peaches in November.