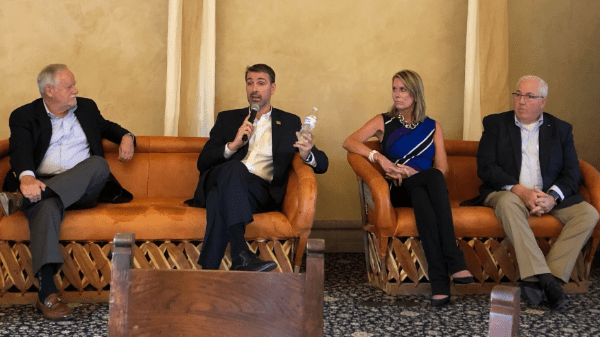 Ron Lemaire, (second from left) Canadian Produce Marketing Association president, said plastic has its place in the produce department. Joining him on a panel at the Fresh Produce of the Americas annual meeting November 7 were (from left) Tom Stenzel, United Fresh president; Britton Clarke, lobbyist for FPAA in Washington, DC; and Rick Stein of the Food Marketing Institute.

Speaking on a panel at the Fresh Produce Association of the Americas annual meeting November 7, Rick Stein, vice president, fresh foods, for Food Marketing Institute, BB #:162464 Arlington, VA, said plastic and packaging are huge topics right now in retail, both in the produce department and other departments.

“We tell retailers not to rush into something,” Stein said.

Consumers say they want less packaging or smarter packaging, but their words don’t match their actions.

Stein said FMI’s research shows that “53 percent of consumers say they will pay more for smart packaging but only 8 percent actually do.”

Stein said FMI is keeping an eye on local government laws regarding packaging.

“We’re concerned local governments will overreact based on consumers,” he said. “We worry that we’ll move too fast and not realize the unintended consequences.”

Ron Lemaire, president of the Canadian Produce Marketing Association, BB #:153602 said on the panel that Canadian consumers are demanding but not realistic with packaging.

“Our consumer research shows that 75 percent want a ban on single-use plastics, but they don’t want any changes to quality or price of packaging,” he said.

Lemaire said the Canadian Prime Minister Justin Trudeau has said he supports a single-use plastic ban, but no one knows what the consequences would be.

“When we package produce it’s for purpose and intent,” he said. “It cuts food waste and improves food safety. There’s a place for plastic.”

Another problem, he said, is that the produce department is just the tip of the iceberg when it comes to plastic in the grocery story. The meat and bakery departments use a lot of plastic packaging.

Lemaire said the bigger problem is that the recycling system in North America doesn’t work properly, and it’s so much cheaper to create plastic packaging from scratch rather than use recycling.

He said CPMA has been doing research on plastic and packaging and plans to publish the results soon.