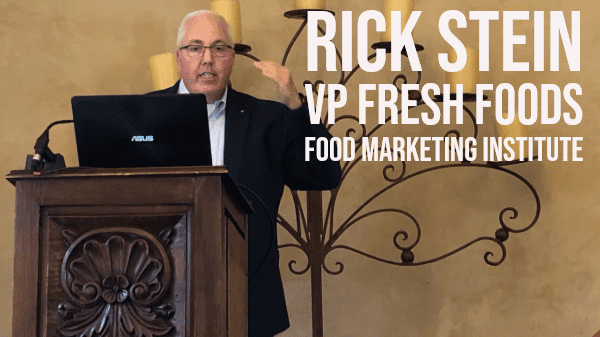 TUBAC, AZ – Fresh produce is such a mature category, it can be difficult to grow.

Buy more
“We need to get consumers out of their comfort zones,” Stein said.

One way is for marketers to encourage consumers to think of vegetables as a protein or carbohydrate part of the meal, such as veggie noodles or rice.

He said his research shows 73 percent of consumers serve plant-based meals at least sometimes, and that can rise with all the new products coming into the market.

Two big ways are organic and local. Organic produce purchases continue to grow, but not as much as previous years. He said retailers should continue to keep a price premium on organic, even as the price difference from growers shrinks.

On local, he said five years ago, consumers’ top reason for buying local produce was perceived freshness. Now the top reason is to help the local economy.

“We tell retailers to define local, say where the produce is from,” he said, as the definition of local varies widely among consumers.

Buy more often
People get stuck in their eating habits, especially eating occasions, so that’s one way to get more purchases. Both breakfast and snacking have room to grow he said.

Some of the opportunies to buy produce can eat into traditionally retail purchases, such as dollar stores, convenience stores, vending machines and airports. But those are positive signs for overall produce sales.

But retailers have a bigger incentive to offer robust produce offerings.

Stein said the produce department has taken over “low price” as the primary reason consumers choose a retailer.