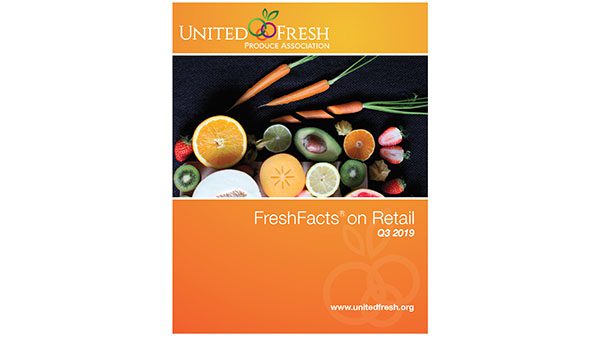 These and more were key takeaways from a live webinar discussing the most recent FreshFacts on Retail report from the United Fresh Produce Association BB #:145458.

Nielsen’s Matt Lally and Jeff Cady of Tops Friendly Markets led the discussion of the report. Lally took the opportunity to highlight the significance of fresh department performance.

“There is a distinct correlation between retailers that have a dedicated and strong performance in their perimeter departments and the translation to overall store performance,” he said. “This is a critical starting point of the conversation, and a reminder to everyone involved that we are participating in a part of the industry that is a real source of consistent and continued growth while many of the other parts of the store have struggled to find that over the past couple of years.”

Lally also reviewed changes to the report based on feedback from United Fresh members. They include a new page that plots the past eight quarters of spotlight items to provide greater performance context, along with more data for value-added, packaged salads and organic produce.

Unit price items, like berries, are reported as such for a more accurate representation of volume and price.

Also, if you noticed household penetration numbers are different, it’s a quarterly look instead of an annual figure, Lally said. In a category like bananas, it shows that 64% of households bought bananas in the third quarter, compared to the annual figure closer to 87%.

“What we observed were there were minimal changes quarter to quarter,” Lally said. “It didn’t have a true reflection of the sales performance within that specific quarter.”

From a retail perspective, Cady says sales were strong in the third quarter.

“It felt good from a produce perspective,” he said. “I look at these reports and they mimic very closely what happens in our chain.”

“This is something that we observed for the past several issues, but it really is the vegetable categories and commodities that continue to innovate and promote new usages and ways to engage shoppers that certainly allow them to continue that strong growth.”

For a more detailed look at the results, United Fresh members can download a free copy of the report here. ($50 for non-members)