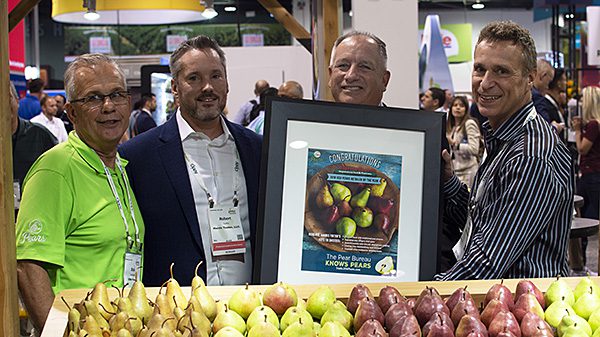 Presented on the show floor of the 2019 PMA Fresh Summit, the award is based upon tactics devoted to pear category improvements in merchandising performance and sales increases throughout the year. “Over the course of the past season, Harris Teeter put forth commendable efforts to build their pear category,” stated PBNW President and CEO Kevin Moffitt. “On behalf of more than 800 pear growing families in the Pacific Northwest, we congratulate the Harris Teeter team on winning the 2019 retailer of the year award. We truly appreciate their support of the Northwest pear growers and their focus on pears.”

Every year, PBNW works directly with grocery retailers throughout North America to generate and increase success in the pear category. During the 2018-19 Northwest pear season, Harris Teeter took a proactive and enthusiastic approach to increasing pear sales, utilizing best practices recommended by PBNW alongside their own innovative merchandising tactics, including multi-variety displays for conventional and organic pears, running a conditioned Anjou program, increasing shelf space year over year, and maintaining permanent end caps at many stores.

Moffitt pointed to Harris Teeter’s adoption of a condition program, cross-merchandising meal solutions, as well as a focus on both in-store and digital promotions as important factors to success. “Consumers want to be able to eat pears within 1-3 days of purchase and Harris Teeter’s commitment to conditioning allowed them to provide customers with high quality, flavorful pears, increasing repeat purchases. They also ran sales contests with ads and displays, digital coupons on pouches, and worked with PBNW staff on cooperative merchandising supported by displays, ads, demos, and social media.”

“The Harris Teeter team really went all in with Northwest pears throughout the 2018-19 season and as a result, they saw a significant sales increase across the category,” explained Bob Catinella, Regional Marketing Manager for PBNW. “Execution at the store level can be a challenge in today’s retail environment, and Harris Teeter has embraced the challenge.”

Mark Hilton, Harris Teeter’s Vice President of Produce & Floral, cited a wide-ranging approach to the pear category as the source of success. “Our commitment to driving sales with outstanding store display follow-through, aggressive sales promotions, and social media awareness has led to double digit growth in our pear category.” Hilton also credited Harris Teeter’s vendor partners for consistently providing them with great looking and tasting pears, which, he said, “makes our job in selling them so much easier. We are humbled that the Pear Bureau has selected Harris Teeter as their retail partner of the year for 2019.”

The Pear Retailer of the Year Award was established by PBNW in 2011. PBNW’s team of regional marketing managers selects the annual recipient based on Northwest pear’s category performance, creativity and best practices in pear merchandising, and overall excellence in supporting the pear category.

About Pear Bureau Northwest
Pear Bureau Northwest is a non-profit marketing organization established in 1931 to promote the fresh pears grown in Washington and Oregon, home to 88% of the US commercial fresh pear crop. The Bureau represents close to 900 grower families and partners with outlets throughout the world in an effort to increase overall success with the pear category. The organization provides marketing and merchandising expertise that is customized specifically for each retail organization, using its pear consumer research findings as well as individual store analysis using an in-house data system that measures pear category performance nationwide and third-party research to show retailers how they perform versus their competition. Retailers who are interested in partnering with Pear Bureau Northwest should contact them at info@usapears.com or 1 (800) 547-4610, as well as visit USAPears.org or Trade.USAPears.org.