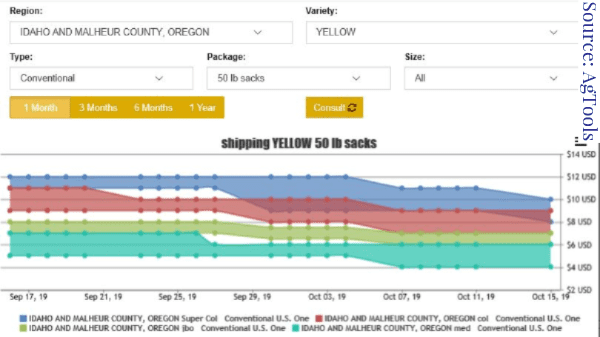 A freeze in the Northwest and Rocky Mountain area at the end of onion harvest may cause a price spike in the market, growers say.

An October cold snap normally wouldn’t have been so difficult for growers in the Idaho-Eastern Oregon Treasure Valley, but rain this summer delayed plantings, and then more rain during harvest delayed onions coming out of the ground, said Shay Myers, general manager of Owyhee Produce, BB #:192696 Parma, ID.

He said 20-25 percent of onions in the area were affected by the cold, which could cut supplies from the area. Normally, onions would have about all been harvested by mid-October.

However, if the cold holds off the next week, Myers said the onions still being harvested could come out of it without much damage.

As of mid-October, Northwest onion prices hadn’t shown evidence of the damage. USDA reported prices about the same as a month ago or a little lower, with yellow 50-pound bags ranging from $4-10 depending on size.

Myers said in a video that he expects prices to rise from the area.

In other parts of the country, such as Colorado and Utah, the cold weather in mid-October hasn’t had as big an effect, as most have already been harvested.

Chuck Bird, salesman for Martin Produce, Co., BB #:101680 Greeley, CO, said North Colorado had 90-95 percent of all onions in the area had already been stored when the freeze hit.

“Of those left out, damage seems minimal,” he said.

“I heard the western slope and Utah took a beating though,” he said. “That said, Colorado and Utah really don’t have much impact on the market. The Northwest drives it 99 percent.”

“It will probably have an effect on the market, but [it’s] still early to see how much of and affect it will have,” he said. “Onions are still being harvested, so it will interesting to see how they turn out after being in storage for a few weeks. There will be issues, [we] just do not know to what extent of the issues yet.”