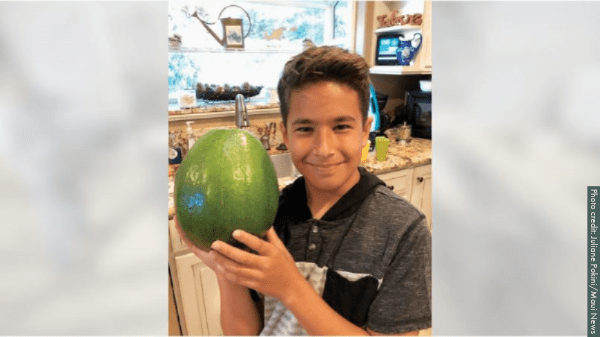 Loihi Pokini shows his world record avocado from his family’s tree in Maui.

Hawaiian avocados have made news the past few years with some enormous fruit, and now a local family can claim a world record.

The Pokini family of Maui received a Guinness world record certificate in early October for the world’s heaviest avocado at 5.6 pounds.

According to a story in the Maui News, the family said they tried to enter a 5-plus-pound avocado in early 2018 from the same tree as the record holder, but it didn’t have the proper documentation.

This time, they had the right paperwork.

The family said their 10-year-old avocado tree produces what they think is the Reed variety, and they don’t do much to encourage the large sizes except keep it properly trimmed. They said they don’t even water or fertilize it.

A Hawaiian grower made news earlier this year when he publicized his 6-pound-11-ounce avocado, but he found the Guinness record process too involved, so he didn’t pursue it.

Juliane Pokini told the Maui News that, “It was just for fun. We are showing the world that Hawaii produces record-setting avocados.”

“We cut it open and made a whole bunch of guacamole, sharing with family and friends,” she said. “It fed a lot of people. We even gave some away.”