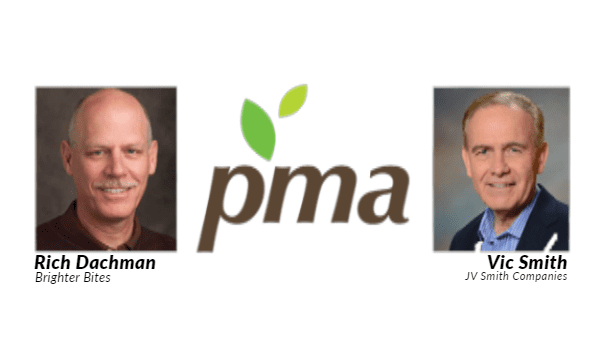 The respective 2018 recipients will present to this year’s winners the morning of Oct. 17 prior to the “State of the Industry” address from PMA CEO Cathy Burns. Joe Pezzini, president and CEO of Ocean Mist Farms, will present the Carey Leadership Award to Dachman. Dave Corsi, vice president of produce & floral for Wegmans, will present the Silbermann Collaboration Award to Smith.

The annual leadership awards honor individuals who have demonstrated exceptional volunteer commitment to PMA and the fresh produce and floral industry, and outstanding collaborative leadership, respectively.

“In my time at PMA, I have seen Rich and Vic consistently share their gifts of leadership and collaboration to help drive important PMA and industry supply chain conversations forward,” said PMA CEO Cathy Burns. “Both are dedicated to helping strengthen our global fresh produce and floral communities, which in turn will help the association deliver on its vision to grow a healthier world.”

The Robert L. Carey Leadership Award was established in 2012 in honor of former PMA president Robert L. Carey, who led PMA from 1958 to 1996, taking it from an organization with fewer than 100 members focused on produce packaging to a vertically integrated association of thousands. His vision of bringing buyers and sellers together positioned PMA to become the global association it is today.

Dachman’s tenure in the produce industry spans more than 40 years, 28 of them at broadline food distributor Sysco where he retired from in June. He has volunteered with PMA and Center for Growing Talent for well over a decade and has been a CGT Career Ambassador since the beginning of the Career Pathways program. He’s served on PMA’s Fresh Summit Committee, Foodservice 2020 Steering Committee, and the Produce Traceability Initiative. Dachman has served on the PMA Board of Directors twice, once as Chair during his second term. He’s also been a longtime supporter and advocate for CGT’s Women’s Fresh Perspectives. Now CEO at Brighter Bites, Dachman served on the Brighter Bites Board of Directors for more than three years.

“I am humbled to be considered in the company of the past recipients of this award,” said Dachman. I have gotten far more from the industry than I have given. Thanks to PMA and the industry overall for a great ride.”

The Bryan E. Silbermann Collaboration Award was established in 2016 in recognition of Silbermann’s 30-year career at PMA, including 20 years as its president. The award recognizes an individual’s collaborative leadership style in uniting industry members or organizations, including those outside the honoree’s own organization, to realize mutually beneficial solutions to an industry issue.

Smith was selected as this year’s honoree due to his long track record as a convener and collaborator who is not afraid to take on challenges and find solutions. He has served on the industry’s Romaine Task Force, worked extensively with Western Growers and the Center for Produce Safety, and was a key player in the Produce Traceability Initiative. Smith has volunteered with PMA and the Center for Growing Talent for more than 10 years. He has also been a longtime supporter of the University of Arizona College of Agriculture and Life Sciences and has supported many charitable causes in his community including Power Plate, which encourages young Arizona schoolchildren to eat more fresh produce.

“I am certainly honored in receiving this prestigious award, more so by recognizing who it is named after,” said Smith. “To follow Dave Corsi as the previous award winner is even more humbling. I thank PMA for including me in this elite circle.”

In their formal remarks, the presenters will share additional information about Dachman and Smith, including providing a glimpse of what motivates each and who they are as businesspeople, industry advocates and volunteers. Fresh Summit registrants with an all-access badge are invited to join colleagues in the Anaheim Convention Center ballroom Oct. 17 from 10:30 a.m. to 12:15 p.m. for the awards presentation and “State of the Industry” address. See the Fresh Summit schedule online at pma.com for more details on what’s happening when.

Additional individual awards will be presented at Fresh Summit, including the surprise announcement of the Floral Marketer of the Year at the Floral Beach Bash Reception scheduled Friday, Oct. 18 from 5:15 p.m. to 7 p.m. in Room 204ABC. The Center for Growing Talent Jay Pack Cultivating Our Future Award will be presented at the CGT Contributor and Volunteer Reception Wednesday evening, Oct. 16. The Center for Growing Talent’s Women’s Catalyst Award will be presented Saturday, Oct. 19 at the sold-out Women’s Fresh Perspectives Leadership Breakfast featuring inspirational guest speaker, Queen Latifah.