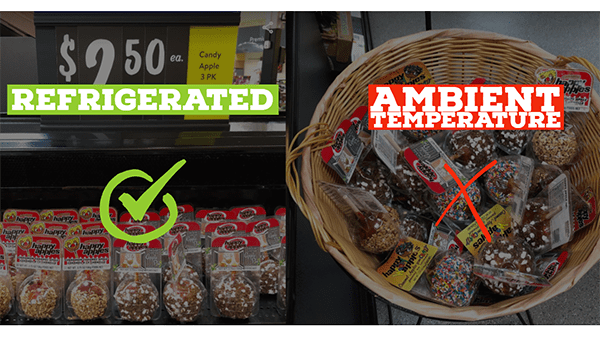 While caramel and apples independently are not prime environments for Listeria growth, the action of piercing the apple with a stick can introduce bacteria. Displaying at ambient temperature accelerates the growth.

It’s that time of year again. It’s time for me to get up on my soapbox and remind you that people have died from eating candied apples stored at room temperature.

I’ve been store checking a lot lately, and I see a lot of candied apples. What’s not to love? They’re synonymous with fall and I’m 100% #TeamApplePieSpice, not #TeamPumpkinSpice.

But I can’t get over how many I find at room temperature.

This is not OK.

Subsequent research conducted at the University of Wisconsin’s Food Research Institute concluded that while the apples and the caramel by themselves typically aren’t a hospitable environment for Listeria growth, the action of piercing the apple with a stick through the calyx, and then leaving it at ambient temperature for days and even weeks until purchased, creates an environment where bacteria flourishes.

The researchers tested several different scenarios and came up with conclusions for consumers, but I feel like the memo hasn’t been shared widely among the industry given the number of displays I find.

Researchers suggested a hierarchy of candied apples, from most to least safe:

So, get out there at have fun with your candied apples, but let’s make sure to merchandise them safely.