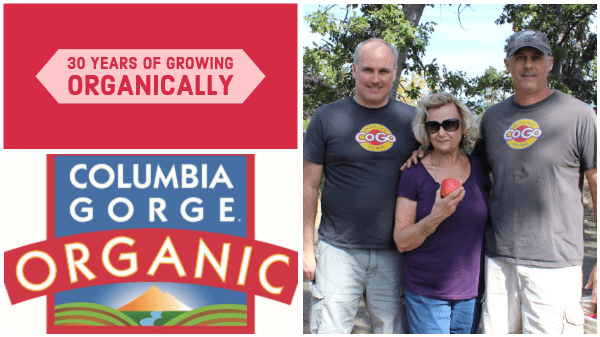 PRESS RELEASE This year Columbia Gorge Organic BB #:314606 celebrates 30 years of growing organically and being pioneers of the organic trade. This Hood River, Oregon based family farm and juice producer is run by Cheryl Stewart and her sons Jimmy and Ronny

Bridges Produce origin story is closely linked to Columbia Gorge Organic “the fact that they are a committed family farm with unique items and respected label made them a great first grower partner for my emerging business 17 years ago” says Ben Johnson, President of Bridges Produce BB #:168499.

He continues “It is fun and rewarding to get to share their incredible story with the organic industry.”

Their story begins with Cheryl and Ron Stewart who left their San Jose dry-cleaning business in 1975 to tour the country in a motorhome with their three young boys. Their journey ended that Fall when they fell in love with Hood River. Having no previous farming experience, they purchased 100 acres of apple and pear orchards and started to learn about the challenges and joys associated with agriculture.

When their oldest son graduated college, he came back to the farm with ideas of transitioning to organic.

“32 years ago I meet Ron and Cheryl at a Tilth conference. Ron asked me if I would buy transitional apples from Hood River claiming that they would be the first to grow organically in Hood River. I was so excited to have a local “organic” option that I was willing to start buying immediately to help them start their organic program!” says Jeff Fairchild, New Seasons Market, BB #:176908 Formerly of – Nature’s Fresh Northwest

While the Stewarts were excited to tackle this new challenge not everyone thought it was possible “Other growers in Hood River said that growing organically could not be done on this scale, but the Stewarts took the risk and it paid off” comments Ben Johnson.

Ron quickly learned that there were gaps in the resources available and techniques being used for organic tree fruit production, so he began to experiment and develop his own methods. One area that was of particular focus was the development of their spray techniques for apple scab and russeting which are now used in organic orchards all around the world.

“Ron and one other grower pretty much invented the idea of brewing and using compost tea. I remember Ron explaining the concept to me with the pure excitement of a kid building a tree fort. He loved innovation and the idea of being on the cutting edge of a new way of growing clean food” says Tom Lively, Organically Grown Company BB #:149476.

They also stared building their own compost from organic materials from the orchard as well as pulp from their developing juice business. They estimate that over the last 30 years they have distributed over 30,000 tons of their organic compost into the orchards.

“From what I recall Columbia Gorge Fruit Company was considered to be the largest Certified Organic Orchard in the US and maybe in the world in the early to mid 90s. That’s when “crazy” started to become appealing and organic orchards really stared developing.” says Lively.

It wasn’t just their organic techniques that were innovative; they also prided themselves on growing specialized and new tree fruit varieties. “One of the times when I remember Ron at full throttle was at the Provender Conference, where he was asked to predict the next great apple. Twinkle in his eye, grin across his face, Ron replied with full conviction, “Honeycrisp” – which most of those listening had not yet heard of.” – David Lively, Organically Grown Company

Their juice business, which started to combat high cull rates, has also seen great success over the years and has diversified their offerings. They now grow 40 varieties of organic tree fruit and produce over 30 organic beverages including juices, superfood smoothies, protein drinks and cold brew coffees.

“They have shown integrity, commitment, and creativity in every phase of their development as a family farm, and later when they established their fresh, organic juice company. The Stewarts have always shown care and pride in what they do–you can taste it in their fruit.” Bu Nygrens, Veritable Vegetable BB #:115276

On this momentous occasion pioneers from the organic industry have come together to share these stories and their congratulations for 30 years of amazing work in the organic field. Congratulations Columbia Gorge Organic and the Stewart Family!