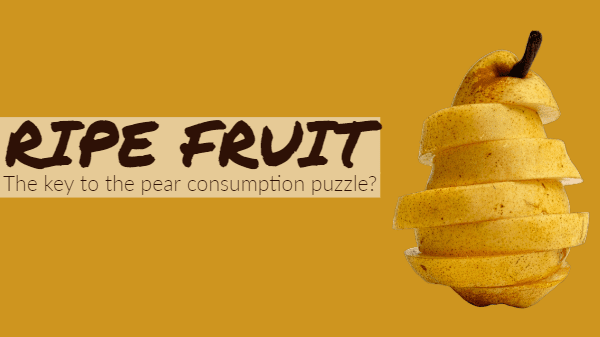 As the Northwest pear season ramps up, grower-shippers say the key to improving demand is getting ripe fruit to consumers at retail.

About a month ago, the Pear Bureau Northwest projected an 18.6 million carton crop, which would be one percent smaller than last year, but Roger Pepperl, director of marketing for Stemilt Growers, LLC BB #:113654 Wenatchee, WA, said early harvest has shown that sizing may not be as big as growers originally thought.

“Most of our pears are grown on the upper river valley, like many others,” he said, and the weather has been good, but a little cooler than normal.

“We’ve had clear skies with no smoke like the past few seasons,” he said, which should lead to high quality. In late August, USDA reported prices from $18-24 per 40-pound carton of Bartlett from California, depending on size. Early season Bartletts from Washington are $28-32 per carton.

Stemilt has already harvested Tosca, Bartlett and Starkrimson varieties, Pepperl said, and it will start Red and Green Anjou and Bosc in early September.

“We are currently shipping D’Anjou, Bartlett, Starkrimson, including organic versions of all three varieties,” he said. “We will harvest Bosc in the week, and Concorde and Asian Pear after that.”

The pear industry knows that consumption has been down in the past few years, and they have a plan to improve consumer demand.

“We put a lot of work and planning into making sure consumers get a great eating experience,” Preacher said. “Pears need to be ripe and ready to eat. This can be accomplished through good harvest planning, flow management, and collaboration with retailers on timing, ripening programs, and other activities like that.”

“Three years ago, we decided to change things on pears,” he said. “We used to use MCP, and it was affecting flavor. Last year, we did no MCP, and we have a better product.”

MCP or 1-methylcyclopropene is a shelf-life extending product, and Pepperl said his company’s testing showed that it affected flavor and ripeness at retail.

“The consumer prefers very ripe fruit,” he said, so pear shippers and retailers need to work harder to deliver on that demand.

“We can change it one retailer at a time,” he said.

According to estimates from the pear bureau, Green Anjou will be the leading variety with 9.5 million boxes or about 51% of total Northwest fresh pear crop, with Bartlett following at 4.8 million standard boxes (about 26% of the total crop), and Bosc with 2.5 million (about 13% of the total crop). There will be 1.1 million boxes of Red Anjou, representing about 6% of the crop.

“Organic pear numbers are included in the overall estimate and their numbers continue to grow with more acres in transition,” the pear bureau said. “This year’s organic estimate is 1.9 million standard boxes (42,000 tons), making up 11% of the total Northwest crop.”