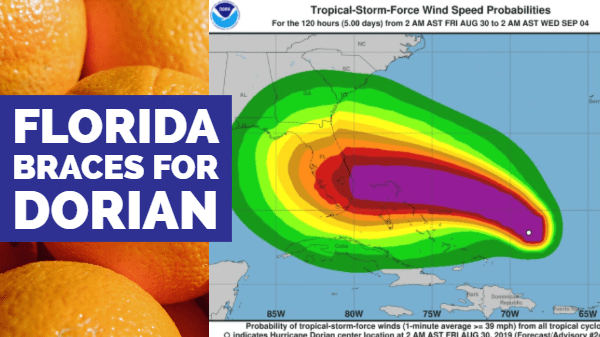 Florida and Southeast citrus and vegetable grower-shippers are bracing for the first major hurricane of the season at a time when citrus growers are preparing for harvest.

Hurricane Dorian is expected to hit Florida and/or Southeast Georgia late Sunday or early Monday of Labor Day weekend, and the timing is terrible for produce industry there.

“We’re watching the same forecasts as everyone and hoping for the best,” said Lisa Lochridge, director of public affairs for the Florida Fruit & Vegetable Association, BB #:153753 on August 29.

“Right now, the cone couldn’t be much worse, but it’s still relatively early.”

“Citrus growers are just a few weeks out from harvest, so the timing is about as bad as it could be. It seems we just can’t catch a break from Mother Nature. Hurricane Irma plowed through the state just a couple of weeks later than this in 2017, we all remember the devastation there. Hurricane force winds blew the fruit off the trees, and there was deep standing water in groves, which posed additional problems.”

“With Hurricane Dorian heading for a direct hit on Florida, It’s no secret that the storm will affect the Florida Citrus and produce industry to a certain degree, we just don’t know how much at this time,” said Nichole Towell, Senior Director of Marketing Duda Farm Fresh Foods, Inc. BB #:189666 Oviedo, FL, August 30.

“On the other hand is the Florida growers, harvesters and their families that are busy preparing for the storm starting this afternoon. Keep in mind that the FL citrus industry could look very different by Tuesday or Wednesday next week.

“As far as Duda Farm Fresh Foods Forida citrus, we are taking all necessary measures to have our associates and infrastructure secure as best as possible and have in place contingency plans if needed. We have gone through this scenario in years past, and it is always best to wait until after the storm, so our growers can provide accurate assessment aftermath of any impact that may affect the coming crop.”

The company grows and ships peppers and other vegetables, and Bolestra said the markets would definitely be affected in September and October, as the deal moves out of the Midwest and northern growing regions into the Southeast.

Lochridge said some vegetable crops have just been planted in South Florida, “but for the most part growers there are behind planting schedules because of the frequent heavy summer rainfall in that region.”