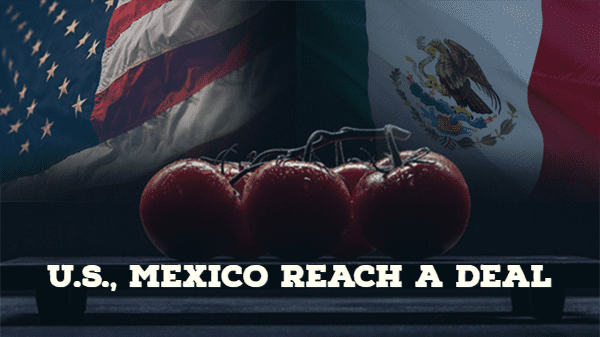 According to news reports, there’s a new agreement for Mexican tomato imports.

The new deal includes one piece of controversy in the process – a vast expansion of border quality inspections, from less than 10% currently to more than 90% under the new plan, according to the reports.

“In the last 20 minutes of August 20, tomato producers in Mexico reached an agreement with the U.S. Department of Commerce, which will allow the anti-dumping investigation to be suspended,” tweeted Graciela Marquez ColÍn, Mexican Economy Minister. “This result is good news because it will keep the market open for our tomato exports to the United States.”

The deal includes one provision that could be a snag for tomato importers: increasing quality inspections at the border to 92% overall. The Fresh Produce Association of the Americas estimates about 8% of loads are currently being inspected.

Mexican growers and importers have fought against that rise in inspections, calling it a non-tariff trade barrier that would be met with retaliation.

Other provisions included raising the floor price of specialty tomatoes, and a 40% price premium on organic tomatoes.

Negotiations were finished just before the midnight deadline for the 30-day comment period for the U.S. Commerce Department’s antidumping investigation to be completed.

The deal is subject to a sunset review in September 2024.