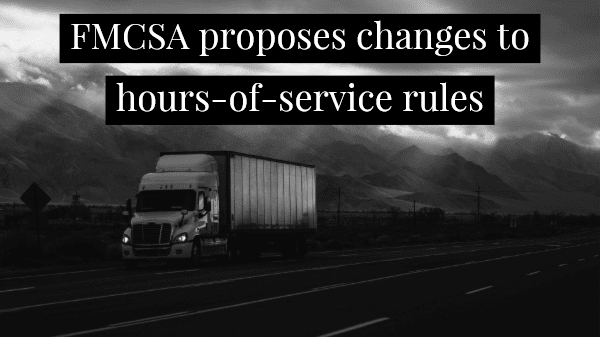 “This is a move in the right direction,” said Robert Guenther, senior vice president of public policy for the United Fresh Produce Association, BB #:145458 Aug. 19. “It was rigid before, but this is a good balance without jeopardizing safety.”

He said the produce industry could see the final rule late this year or early next year.

United Fresh said the key changes in the proposed rule are:
• Increase safety and flexibility for the 30-minute break rule by tying the break requirement to eight hours of driving time without an interruption for at least 30 minutes and allowing the break to be satisfied by a driver using on duty, not driving status, rather than off duty.
• Modify the sleeper-berth exception to allow drivers to split their required 10 hours off duty into two periods: one period of at least seven consecutive hours in the sleeper berth and the other period of not less than two consecutive hours, either off duty or in the sleeper berth. Neither period would count against the driver’s 14 hour driving window.
• Allow one off-duty break of at least 30 minutes, but not more than three hours, that would pause a truck driver’s 14-hour driving window, provided the driver takes 10 consecutive hours off-duty at the end of the work shift.
• Modify the adverse driving conditions exception by extending by two hours the maximum window during which driving is permitted.
• Change to the short-haul exception available to certain commercial drivers by lengthening the drivers’ maximum on duty period from 12 to 14 hours and extending the distance limit within which the driver may operate from 100 air miles to 150 air miles.

Guenther said the ELD exemption from 100 to 150 miles is an important change, and United Fresh is still working with the FMCSA to define fresh-cut and other processed fruits and vegetables as agriculture commodities, the same as whole fruits and vegetables, which would be covered in the short-haul exemption.

He said the association’s supply chain council will discuss the changes at its meeting during the Washington Conference Sept. 16-18.