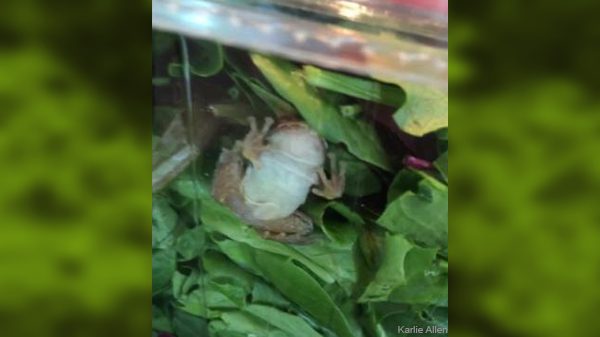 A Wisconsin family bought a clamshell of Simple Truth organic salad at Pick n’ Save that contained a live frog. How does this happen?

It was only a matter of time before we saw another story of another consumer who finds a frog in their packaged salad.

It happened again. Over the weekend, a live frog was found in a clamshell of Simple Truth brand organic salad greens purchased at Pick n’ Save in Glendale, WI. (THERE’S A VIDEO!)

I’ve been thinking about frogs in salads a lot – ever since I attended the Center for Produce Safety Research Symposium in Austin in June. At the symposium, researchers presented updates of CPS-funded projects.

Organizers had the brilliant idea of putting the frogs and falcons after lunch, when most people were probably ready for a tiny siesta. Instead, we were entertained by the presentations of projects trying to prevent frog intrusion in fields and using drones and falconers to drive away birds.

Both projects were fascinating, and something you don’t often hear about.

Most of us in produce are no strangers to critter incursion. My grandfather, a banana ripener for Safeway way back in the day, said the zoo stopped accepting snakes after the first few were found. The spiders were terrifying, too.

It turns out frogs in salads happen – often. I dare you to google it.

I had a general idea, especially after this presentation by Michelle Green of the University of South Florida.

Researchers are studying the patterns of pacific tree frog intrusion to find out why they gravitate toward leafy green fields, and methods to keep them out.

So far, Green said two methods show promise: fencing with a sandpaper-like texture that makes it uncomfortable for the frogs to climb; and a fencing with a lip that encourages frogs to just hang out instead of continuing into fields.

Oh, by the way, standard field fencing has zero effectiveness against tree frogs. That’s something to chew on.

I’d kind of forgotten about this session until I went on the buyer tours during the Organic Produce Summit in Monterey, CA, in July. My tour visited the Salinas, CA, Taylor Farms Retail salad plant, where I got a first-hand look at how salad goes from the hydrocooler to a clamshell.

(Unfortunately, Taylor Farms did not allow photos or videos)

During this tour I gained a greater appreciation of how these frogs can make it through the salad packing process. Freshly picked greens are emptied onto conveyor belts, tumbled through washers and zip through a process that gets them into a package as soon as possible.

Most foreign matter (tree frogs included) is detected by the optical sorters and removed. This is where they typically find our amphibious friends.

No system is perfect, however, and an occasional one avoids the mechanical harvester, makes the swim and the tumble through the giant salad spinner, through the packing process and into a consumer’s home. If I found one, I’d probably name it Chuck Norris, or Boris the Blade, or Keith Richards and keep it as a pet.

Considering there are millions of clamshells and bags of salad that go through these plants every week, we’re bound to see these stories from time to time.