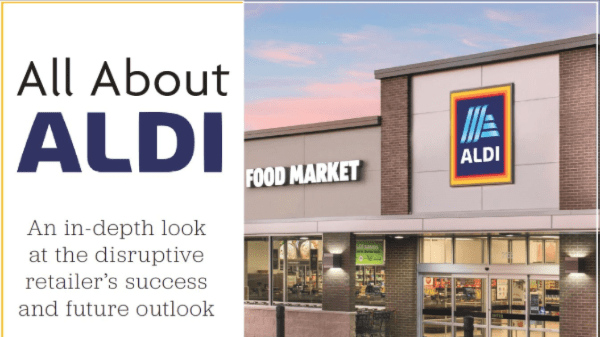 “Limited-assortment stores, led by Aldi, have for almost a decade been the hottest format we track,” said Jim Hertel, senior vice president at the Winston-Salem, NC-based firm.
“There’s not a lot of weakness there.”

He notes that Aldi is expanding its presence both in markets where it has already established itself, and new ones.

The latter, which includes states west of the Rockies, may prove to be a challenge. Aldi relies on word-of-mouth marketing and will have to introduce consumers to the concept and encourage them to tell their friends.

Analyst A.T. Kearney estimates Aldi’s share of the grocery market at just 2 percent, compared to about a third for Kroger and Walmart combined. But its impact is outsized.

“Aldi is bringing price pressure to all of its competitors, large grocery chains and smaller independents alike,” said Steve Grinstead, founder of The Grinstead Group in Plano, TX. “It will be difficult, if not impossible to out-Aldi Aldi.”

He notes that competitors will need to have their own value proposition, whether this is a focus on selection, premium quality, or a special shopping experience.

Mark Hayes, president at Twin Garden Sales, Inc. of Harvard, IL, BB #:119080 agrees that many competitors will respond by going the opposite direction—offering loss leaders to bring in new customers and then keep them by focusing on services such as home delivery and pickup, delis and hot bars, and the like, rather than trying to meet Aldi’s everyday prices.

“It doesn’t lower their image, their quality, or their price, and it offers additional services to keep people from going to Aldi, where you have to bring your own bags.”

But Aldi has already had an impact on how some of its competitors do business.

“Aldi has shown other retailers that you can have a high-quality private label and create very loyal consumers,” said Phil Lempert, the Santa Monica, CA-based Supermarket Guru and publisher of The Lempert Report.

“Retailers have had their own store brands for decades, but Aldi showed them the need to be high quality and have a variety of products.”

All our experts agree Aldi has made its mark as a significant competitor and its rivals have taken note.

“The best way to frame Aldi’s disruption is that, more often than not, it forces competitors to do things they normally would not do,” said Simon Johnstone, director of retail insights at Kantar Consulting, Boston, MA.

Laura Strange, senior vice president of communications and external affairs at the National Grocers Association in Arlington, VA, BB #:163424 puts it this way: “The supermarket industry has always been a fiercely competitive, but Aldi is certainly putting pressure on its competitors, both large and small.”

At this juncture, Aldi’s business model is sound, and its future is bright. It seems well positioned for continued success, especially among consumers attracted to consistently low prices, whether by need or desire.

“It’s not a format that has applicability to 100 percent of consumers,” acknowledges Hertel. “I wouldn’t expect much cross-shopping between Whole Foods and Aldi; but for those with an interest in value, Aldi hits that chord.”