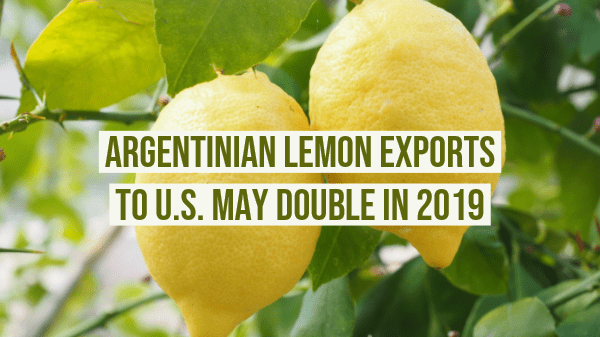 Despite weather and sizing issues, Argentina expects to have doubled its lemon shipments to the United States by the time the season ends next month.

There have been considerable delays at the beginning of the season for the harvest out of Tucuman, where 80% of the national production comes from, due to heavy rains and stoppage of transporters.

This gave way for tons of fruit to be dumped due to sizing and because it could not be processed industrially, reducing exports by 20%.

Overall, experts consulted by La Nacion estimate that the present campaign, which runs from April until the end of August that there will be a total of 1.5 million tons of lemons produced; in 2018 there were 1.6 million tons.

Pablo Padilla, the president of the Citrus Association of Northeast Argentina, explained to Elonce that, “With almost 50 days of rain in the fall there was a significant delay in the harvest and the fruit developed a size greater that that required for export. This forced to allocate a greater percentage of lemons to the industry which filled its processing capacity and that’s why it was necessary to dump part of the production.”

However, Padilla goes on to state that apart from this delay and lower levels of exports to other destinations, such as Europe, there will be 23,000 tons exported to the United States, which would double the amount exported last year.

It is estimated that 77% of Argentina’s national production of lemons will be destined for the juice, pulp, oil, and dehydrated skin industries, while 18% will be exported as fresh fruit.