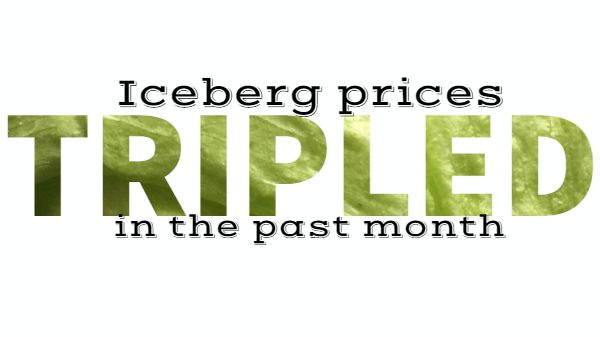 Mid-June heat has cut lettuce volume from the Salinas, CA, growing region, causing prices to spike to the $30 per carton range.

Grower-shippers say expect the market conditions to remain until mid-July.

Jason Lathos, manager of commodities for Church Brothers, BB #:161800 Salinas, CA, said temperatures June 8-12 were in the 100s, more than 20 degrees higher than normal, and that caused iceberg lettuce crop losses of 20 to 30 percent.

“We can live with the cool and rain, but heat, we can’t,” he said June 28. “The lows didn’t go down at night, so it was baking for four days straight.”

USDA’s Agricultural Marketing Service reported iceberg lettuce cartons of 24s were $29.65-32.55 on June 27 from Salinas-Watsonville, CA, up from $7-10 at the beginning of June.

In addition to lighter yields, Lathos said unusual weather across the country has affected crops, delaying summer local lettuce deals in many regions in the Midwest, East and Canada.

Ryan Laughton vice president of crop production and grower relations for Coastline Family Farms BB #:141488 Salinas, said the weather has gotten back to normal the past week or two.

“We’ve had a good run the last 10 days to 2 weeks,” he said, June 27. The heat “cost some uniformity issues, so you’re seeing mixed sizes and gaps, so that’s driving volume down.”

“It will probably roll into mid-July, and then things will get better, closer to historical averages, and I would expect price to drop as local production starts (across the country),” he said.

Lathos said prices have been in the low $30s per carton, and demand remains strong.

“There are people calling in that I haven’t heard from for three or six months, so you know it’s an active market,” he said.

Lathos said that while Independence Day isn’t a typically strong salad holiday, the holiday week will disrupt harvest and transportation.