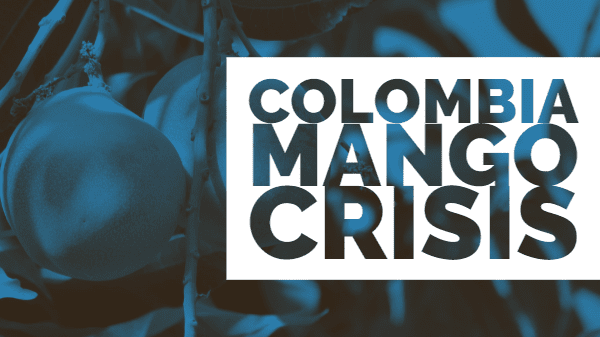 In Cienaga, Magdalena, Colombia, there are mountains of mangoes lining the dirt roads, rotting away without anyone being able to take them to market.

Gustavo Campo Hernriquez, who has dedicated his life to cultivating mango and lime, tells El Tiempo that “As long as there is no government policy to help prevent this from happening, the damage will continue.”

According to a study revealed by the Hortifruticola Association of Colombia (Asohofrucol), the department of Magdalena is the third largest mango producer in Colombia, after Cundinamarca and Tolima. However, it has potential to become the largest because of the quality of the terrain.

These sweet and fibrous mangoes of the Magdalena region, known as sweet mangoes, are appreciated internationally, mainly in Europe and countries like France. Preserves made from the fruit are shipped to 40 nations around the world.

Fidel Arevalo, director of Asohofrucol, tells El Tiempo that right now, close to eight tons per hectare of harvested mangoes are lost due to lack of customers being able to access the fruit in the region.

“It is an incalculable amount of losses,” Arevalo said. “It is generating social damages due to unemployment. The losses are increasing.”

Many families work these lands to assist in getting by. Airan Pino Chacon, for whom mangoes have been his family’s alternative of subsistence, tells El Tiempo, “It is a pity for lack of help from the government that the crop is lost and can’t even be given away because transportation to the location is not easy.”

There has been talks of bettering the roads for transportation, to which another farmer replies, “Here the talk of the roads is a never-ending story, neither the municipality nor the Government have been put in agenda to improve the means of transportation.”

According to figures presented by Asohofrucol, over 6,000 employees work in the mango harvest, of which at least 30 percent have lost their jobs due to the emergency.