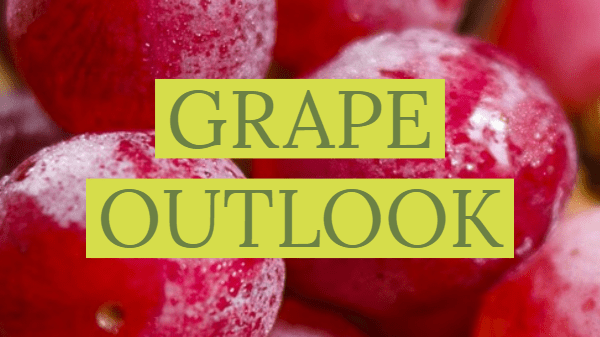 A supply gap from Chile to Mexico will keep grapes out of big Memorial Day promotions.

Chile is finishing its grape season, and the Mexican crop’s start has been delayed by at least a week because of cold weather, which means shipments are only about one-third of what they are normally in mid-May, said John Pandol, director for Pandol Bros., (BB #:111977) Delano, CA.

“The gap is from Chilean fruit, and it’s already happening,” he said May 16. “We’ll see it next week, mid-week, for Mexican fruit in the market.”

“Memorial Day is good for ads and usually an important holiday” for grapes, he said, but there won’t be enough volume in time for most retailers to run big holiday promotions.

USDA’s Agricultural Marketing Service reported $38-42 for carton of Chilean white seedless grapes May 16, $18-22 for cartons of crimson seedless and $26-30 per carton of black seedless, on both East and West Coast ports.

Other than a late start, Mexico should produce a good grape season. Early projections had the crop at about 1/3 larger than last year, but it’s looking more like ¼ larger now, Pandol said, which would mean about a 21 million carton crop.

Biswell said June should be great month for grape promotions.

“It will be a heavy crop in June, a lot of fruit, more than normal,” he said.

California’s Coachella Valley should also be delayed this year, Biswell said, which won’t provide enough volume for holiday deals. It typically runs from late May to mid-July.

Pandol said there’s some concern that Mexico will need to harvest and ship a 9-week crop in 8 weeks.

Grape veterans say they ship 80 percent of the crop in 40 days, he said, but with the delay this year, “you’re pushing the same product through 11% less time. Now you potentially have as much as 25% more grapes to push through that smaller timeframe.”

Pandol said another problem may be the lack of Sunday crossings at the Nogales, AZ, border crossing.

“U.S. Customs and Border Protection and Mexican Customs have opened on Sundays if there was peak demand, but as hundreds of agents have been reassigned to deal with the wave of Central American migrants, that is a higher priority task than commercial shipments,” he said. “No Sunday crossing will affect some operations more than others.”

Biswell is less concerned about a compressed Mexican grape season. He said the shipments should look like a traditional bell curve, just starting 7-10 days later and finishing about the same delay.