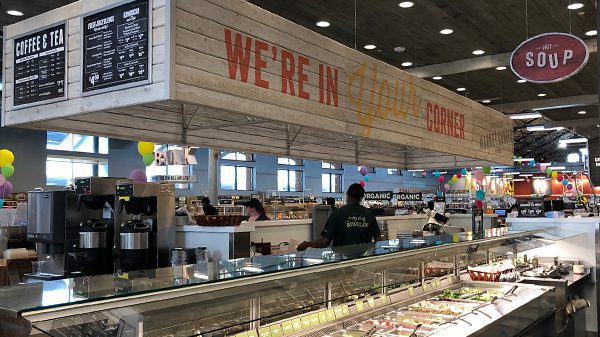 Sprouts Farmers Market plans to expand its new concept, like this store in Philadelphia, in new store openings next year.

The company’s new store concept (See a video tour here) with enhanced deli and prepared foods, is a hit with customers, Lukow said.

“You can go to any supermarket and get something that you can pick up and eat that’s convenient,” Lukow said. “But there’s a huge difference between what many other retailers offer and what Sprouts offers. And we’re all about natural, organic, healthy ingredients at good prices. Particularly in the deli area, recent consumer research has come back and saying the customer certainly enjoys our fresh offering in the deli area.”

Customers also appreciate what Sprouts has to offer for delivery, he said.

“Customers look to Sprouts as a trusted, reliable partner for added convenience in their busy lives,” he said. “We have expanded our testing of click and collect and are now offering this service in a number of stores in six states.”

“And the Sprouts brand, which is all about fresh, is really resonating with customers,” Lukow said. ”So we see a continued increase in average weekly sales on home delivery. By the end of this year, it’s going to be 1.75% to 2% of our total sales. Basket size is 2.5x that of the store.”

Produce supplies hit a snag in the first quarter, with heavy rains in California.

“We saw some pretty significant, what I’d call hyperinflation, in a number of products in the produce categories that really restricted our ability to get our quantities at reasonable cost,” he said.

“And that also reduced our ability to promote, and therefore we had a little bit lower sales than we would’ve expected in produce as a result.”

Continued rain and cold weather out of Mexico will have negative impact on some produce items in Q2, he said.

The company said it is on track to open almost 30 new stores in 2019, and is focusing on new markets, and new concepts – a diversion from its past performance.

“Historically, two thirds of our stores in any given year opened up in our existing markets—sort of Texas-West,” he said. “This year 55% of our new stores, the 28 stores that will open, are opening in new markets.”

That includes expansion to two new states in the second quarter – New Jersey and Louisiana.

Next year’s openings will be all part of the company’s new prototype.

“We have now six stores in place, and there’ll be eight total incremental new forma stores this year,” he said. “And then beyond 2019, every new store that we open is in this new prototype, which is all about the customer experience, particularly around deli and meat and seafood. It’s more of a theater with all the service from within a rectangular island within the store.”

Greg and Pamela talk Sprouts, and fresh produce in this analysis from The Produce Reporter Week in Review: