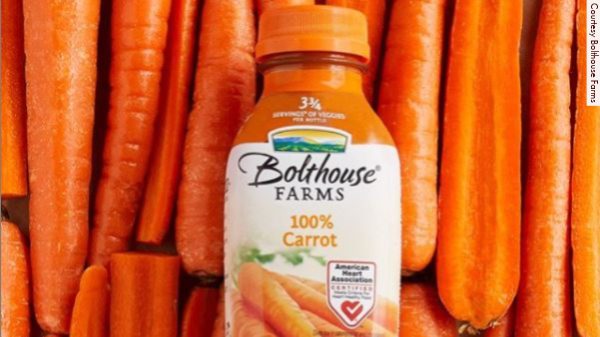 The sale to Butterfly Equity, a firm specializing in food based in Los Angeles, was for $510 million.

According to a release from Campbell, “Upon the completion of the sale of Bolthouse Farms, which is expected by the end of fiscal 2019, Campbell will have divested its entire Campbell Fresh division. Campbell recently announced the sale of Garden Fresh Gourmet and the company’s Everett, Washington, refrigerated soup plant. In fiscal year 2018, Campbell Fresh recorded net sales of $970 million. Proceeds from the divestiture of the Campbell Fresh businesses will allow the company to reduce debt by approximately $570 million.”

Campbell bought Bolthouse, which specializes in fresh carrots, beverages and salad dressings, for $1.55 billion in 2012. Bolthouse Farms is based in Bakersfield, CA, and operates facilities in Hodgkins, IL; Wheatley, ON; and Prosser, WA. The company has about 2,000 employees.

In the release, Mark Clouse, Campbell’s president and CEO, said, “The sale of Bolthouse Farms supports our strategy to focus on our two core North American businesses, Campbell Snacks and Campbell Meals and Beverages, where we have iconic brands and strong market positions.”

According to Butterfly’s release, “Bolthouse Farms is Butterfly’s fourth investment within its ‘seed to fork’ approach to investing in food across agriculture, aquaculture, food and beverage products, food distribution and foodservice.

“We are proud to support Bolthouse Farms in further bolstering its strong positioning within fresh carrots and chilled premium beverages, and are excited to back a group of seasoned operators as passionate about produce as Jeff and his team to lead what is already a strong organization,” said Dustin Beck, Butterfly’s co-founder, in the release.

“Bolthouse Farms holds a special place in the produce industry and my team and I are deeply committed to strengthening and broadening Bolthouse Farms’ unique legacy,” said Dunn in the release. “We can’t wait to get started.”

The closing of the transaction is subject to regulatory approvals and customary closing conditions and is expected to occur this summer.