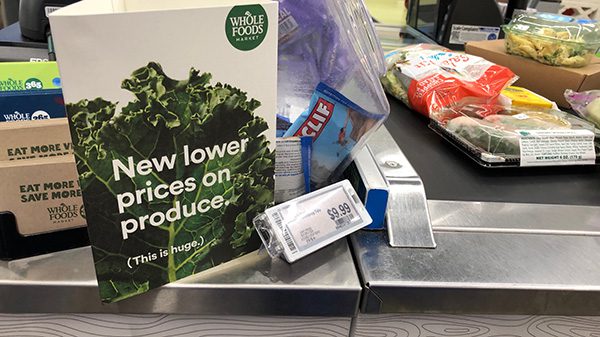 The entire store, from the front door to this card at checkout, promotes lower prices. But why?

Seattle-based Amazon launched another round of price investments and Amazon Prime discounts for its Whole Foods Market grocery banner, but reports say shoppers aren’t buying it.

This Business Insider article cites a dozen or so (often snarky) comments from shoppers, most of whom also pointed out the data collection activity of scanning a QR code that links the shopper’s Prime account to the store visit – for no perceived benefit to the shopper.

“They are building a full consumer profile on us in the guise of a discount,” one shopper told Business Insider.

I stopped by the 365 by Whole Foods Market over the weekend to check prices, and to see if there have been any changes since reports surfaced that Amazon plans to cancel the banner.

So far, it’s business as usual at the Cedar Park, TX, location, though my 10-year-old said it looked like “this is the store that they forgot” because many shelves were empty, particularly the prepared foods.

Signage promoting lower prices is all over the store, from large stand-ups at the front entrance to small cards added to the checkout lanes.

I wasn’t blown away by some of the prices I saw: $1.79 for organic pears; $2.49 for Sumo Citrus; $2.99/pound for Fair Trader organic strawberries (OK, that’s cheap because standard strawberries were $3.49 a pound); and $2.99 for pineapples, but they were cheaper than usual.

In its defense, Amazon said Prime shoppers have saved $100 million in the year since it cancelled Whole Foods’ loyalty program and implemented Amazon Prime-exclusive discounts.

As long as I can remember covering Whole Foods – the past 14 years – I can recall them trying to shed the “Whole Paycheck” image, with little success.

Maybe it’s time to embrace who you are and go high end, instead of trying to meet everyone else in the middle? Isn’t this why Amazon decided to do a separate grocery banner?