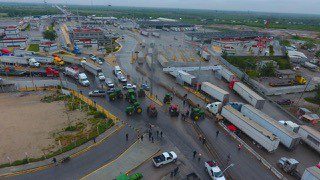 A Mexican farmer tractor blockade at the Pharr, Texas, border crossing has stopped shipments there, including fresh produce.

“Avocados, broccoli, mangoes, limes and tomatoes are all in season and crossing in heavy numbers, especially ahead of the Easter holiday,” said Dante Galeazzi, CEO and president of the Texas International Produce Association.

He said shipments have been diverted to other Texas ports of entry, but it caused major problems April 1.

“Trucks had to divert to other bridges,” he said, noting that many were already in line and unable to quickly get out and move to other locations.

“Buyers could see the effects as soon as today,” Galeazzi said April 1.

He said the protest started about noon, but he’s optimistic that the blockade will be over quickly, as the Mexican Secretary of Agriculture was headed to the border crossing to meet with the farmers and hear their concerns.

“There will certainly be disruptions along the supply chain,” he said.

UPDATE 8:30 AM April 2: Galeazzi said the blockade dispersed late at night on April 1. Mexican farmers began meeting with representatives with the Mexican government, and they agreed not to block the border during the negotiations. Crossings have resumed for now.