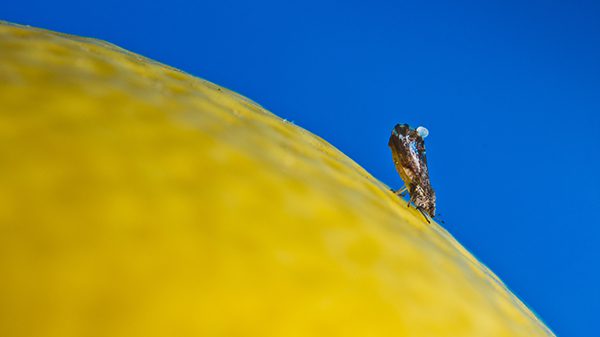 Source: Center for Invasive Species at University of California-Riverside

California stands alone among growing regions battling – and so far, containing – huanglongbing, and the latest investment shows that allies come from all over.

Givaudan, a Swiss flavor and fragrance company, bolstered its partnership with the University of California Riverside in mid-March, by donating $3.5 million to pay for a 2.8-acre protective screened area for the UCR Citrus Variety Collection.

The collection includes more than 1,000 types of citrus and sits on 22 acres on the UCR campus.

“This is outstanding,” said Joel Nelsen, strategic advisor for the California Citrus Mutual.

He said California law requires that any proprietor who wants to produce citrus root stock in the state, must work with this program to guarantee that it doesn’t carry a disease.

“We’ve managed to do something no one else has,” Nelsen said, referring to the fact that more than five years after the discovery of citrus greening disease, also known as huanglongbing, the citrus industry in California is healthy.

So far, the state has removed more than 11,000 HLB infected trees, many from home owners’ yards, and Nelsen said that has helped contain the disease, that has significantly harmed other citrus growing regions in Asia, Mexico and Florida.

Givaudan has collaborated with UCR since 2006.

“As global leaders in citrus, protecting citrus biodiversity and creating a sustainable future is a primary focus for Givaudan,” said Louie D’Amico, president of Givaudan’s Flavour Division, in a news release.

HLB is caused by bacteria that is transmitted by the Asian Citrus Psyllid. Once a tree is infected, it will produce smaller, poorer quality fruit, and it will eventually die from the disease.