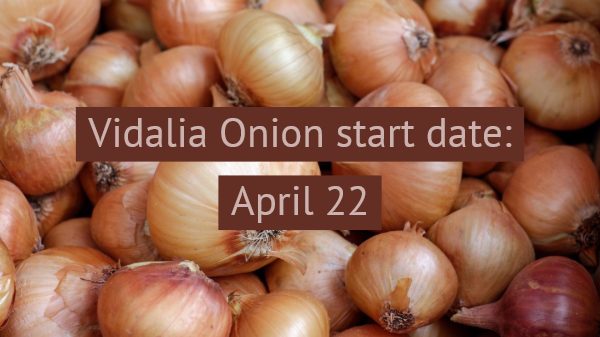 Buyers should see a smaller crop of Vidalia onions this season, as the official first pack date has been set, and the overall onion market sees a spring price surge.

On March 18, Georgia Agriculture Commissioner Gary Black announced that April 22 is the start date for the famous sweet onion.

Bob Stafford, manager of the Vidalia Onion Committee said March 18 that the crop should be smaller this year.

He said the planting season was very wet, and then the growing season was an odd mix of warm and cold, but the last few weeks have been very nice, so he expects a strong season.

The USDA’s Agricultural Marketing Service reports mid-March onion prices of $13-15 per 50-pound bag of yellow onions from Washington and Oregon. Those prices are nearly double what they were a month ago.

Prices on Mexican yellow onion crossings through south Texas were $18-22 per 50-pound bag.

Shay Myers, general manager of Owyhee Produce, Parma, ID, which sells its own onion crop in the Northwest and markets onions year-round, said a combination of factors is pushing the market up.

He said because onion yields were down in Canada and the Northeast U.S.; throughout most of Europe; and then in Mexico, causing much of its product to stay in the country, demand for Northwest onions has been very strong, which is running through supplies faster than expected.

“The market has doubled or tripled in the last 10 days,” he said March 18.

Myers said prices may have stabilized for the next few weeks until the Texas crop begins in late March.

“If there are any weather problems in Texas, it could double again,” he said.

Onions will still be available through the spring and summer, but he said “with the California planting reduction, we could see higher-than-average prices through the end of July.”

John Shuman, CEO of Shuman Farms, Reidsville, GA, said he expects a smaller Vidalia crop this season after several record-breaking crops in the past few seasons.

“Acreage is down about 17 percent from last year,” he said.

There are some weather reasons, but he said the main reason is economic.

“Last season we had the largest crop in history, and prices have not been sustainable,” he said. “It will still be a normal crop [this year]. The last few years are been records, and that’s not normal.”

He said weather in the month before the season starts will be critical to the crop’s quality. By mid-March, growers have started to see some downy mildew, he said, so they will keep an eye on it.

This year, the Vidalia Onion Committee is launching “The Sweet Life,” a marketing campaign to reach home cooks across the country, the committee and the Georgia Department of Agriculture announced in a joint press release.

The campaign targets grocery shoppers who enjoy cooking and entertaining.

“The Sweet Life builds on our very successful marketing effort over the last two years that helped to raise the profile of the Vidalia onion among food connoisseurs, particularly millennials who set many of today’s consumer trends,” Troy Bland, chairman of the Vidalia Onion Committee, and COO of Bland Farms, said in the release. “Now we plan to focus on broader category of consumers who like to cook, entertain and use onions. The goal is to elevate the brand as a signifier of good taste and living well.”

Vidalia onions represent about 40 percent of the sweet onion market in the country and are sold in every state. The Vidalia trademark is owned by the state of Georgia because of the Vidalia Onion Act of 1986.