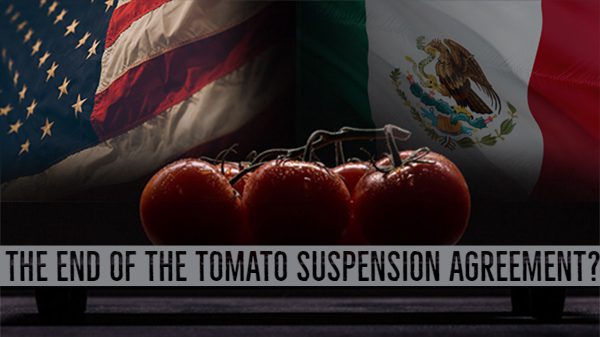 PRESS RELEASE Nogales, AZ—The Fresh Produce Association of the Americas (FPAA) is disappointed to learn that the Department of Commerce intends to withdraw from the 2013 Tomato Suspension Agreement with Mexico.

Commerce on Feb. 6 indicated it intends to withdraw on May 7, 2019, from the 2013 Tomato Suspension Agreement with Mexico. By statute, the Department of Commerce must give 90 days’ notice of withdrawal. The agreement remains in effect during this window, and buyers and sellers must continue to follow the rules.

“The Tomato Suspension Agreement has brought stability to the U.S. tomato market for over two decades, and it has been updated as the market has evolved,” said FPAA President Lance Jungmeyer. “These updates have resulted in a wide selection of fresh tomatoes for U.S. consumers, while complying with U.S. trade laws, and adding enforcement mechanisms as the agreement itself has evolved. Despite Florida’s rhetoric, the record has shown that both Mexican growers and U.S. distributors have complied with the rules of the agreement.”

FPAA reiterates the importance for Commerce to continue negotiating with Mexican growers toward a new agreement.

“There is still time to reach a new agreement that serves the interests of U.S. growers of tomatoes, as well as importers of Mexican tomatoes,” Jungmeyer said. “What is crucial is that the renegotiation is not distorted by the politics of protectionism.”

The Florida tomato industry seeks to control more than import prices of tomatoes from Mexico sold in the U.S., Jungmeyer said. “They are seeking to have second, third and fourth sales covered under the minimum price, including handling and freight charges. This is clearly outside of the scope of the law and is intended to discourage U.S. businesses from selling Mexican tomatoes.”

Jungmeyer reiterated that it would be regrettable if this development caused an increase in tomato pricing or a reduction in varieties on supermarket shelves. “American consumers deserve to have free choice and selection of their preferred tomatoes, including vine-ripened tomatoes,” Jungmeyer said.

Between now and May 7, buyers and sellers must continue to abide by the terms of the 2013 Tomato Suspension Agreement with Mexico. If an agreement is not reached by May 7, tomato imports from Mexico will have duties applied.

About the Fresh Produce Association of the Americas: The FPAA is a nonprofit trade association headquartered in Nogales, Arizona, that represents over 120 U.S. member companies involved in growing, packing, sales and transportation of fresh fruits and vegetables grown in Mexico. The FPAA leverages the efforts of private companies and partner-associations to increase the consumption of fresh fruits and vegetable from Mexico.