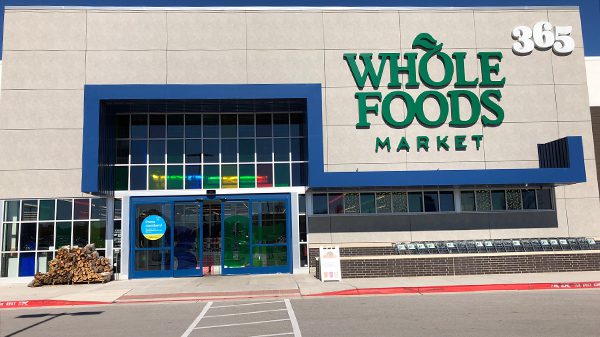 You’re only 2,000 feet from my front door, 365 by Whole Foods Market, and I pass by you nearly every time I leave the house. But I just can’t find a reason to shop.

And it seems like Amazon can’t find a reason for you, either. The company shifted away from the smaller format, so-called “Millennial” concept store, halting plans for new builds while leaving existing locations intact – for now.

I stopped by to grab a few photos for posterity’s sake, just in case they kill it before I have a chance to again.

It’s always seemed like the concept was an afterthought. The one near my house in Cedar Park, TX, only looks slightly different from a Whole Foods – with a little 365 kind of stuck on the side of the store’s banner like someone forgot to put it there originally.

I’ve often thought, “Wouldn’t it be great if that was a Trader Joe’s instead?” You wouldn’t be able to find a parking spot in this huge development if this was a Trader Joe’s because the next closest one is 15 miles away down in North Austin.

Trader Joe’s has a much more loyal following than a stripped-down Whole Foods without all the wacky cool stuff that makes Whole Foods fun. The people I know who have tried 365 said it wasn’t cheap enough, wasn’t organic enough, didn’t have enough prepared foods, and just wasn’t…enough…to draw them in repeatedly.

Even the Amazon Prime deals weren’t that spectacular.

The one thing I loved about 365 that I think every retailer should think about for limited assortment stores is the “Veg Valley” open cooler concept that runs along the wet rack wall. Both the Los Angeles and Cedar Park stores I’ve visited had this feature, which helps keep vegetables crisp, especially in a low-labor model like this.

Who knows what the future will bring for Amazon’s 365 by Whole Foods plans? I’ve heard people say the concept will be converted to Amazon Fresh. I’ve heard it will be converted into a smaller version of traditional Whole Foods, but none of it is clear, and we don’t have any insight via the lively quarterly reports hosted by John Mackey, AC Gallo and Walter Robb we used to enjoy pre-Amazon.

The latest quarterly results re: Whole Foods are a confusing mess of brick and mortar that Amazon itself says it can’t interpret right now. The raw numbers say there was a steep 3% decline in physical store sales for the first full year comparison for Whole Foods after the acquisition, but Amazon walked that back and said the number is actually more like 6% when you adjust for a week discrepancy between reporting periods.

For now, I’ll keep watching 365. I’ve noticed they still had some promotions in the pipeline. I got my pre-Super Bowl ad via email this week, complete with cute avocado emojis in the subject line.

And just today I saw a Bank of America deal for 5% off when I use my debit card at 365 flagged on an H-E-B purchase on my online banking.

But still, even 4 for $5 organic avocados aren’t enough to get me in the door.