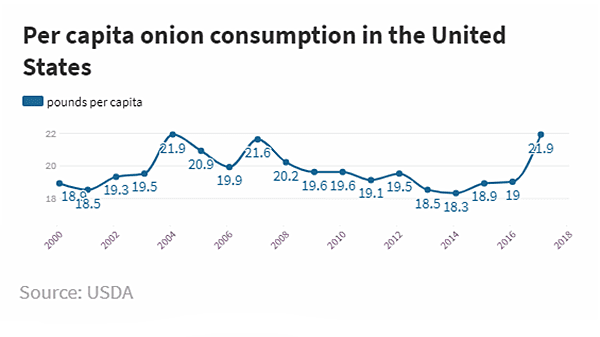 The big story in onions is consumption.

Strong yields in 2017 helped support this rise with consumers appreciating the vast versatility of both dry and sweet onions. Like potatoes, packaging options are lending a hand, whether in bags or value-added dishes.

“There’s been a big push toward more retail-style packs,” says Geoff Cutler, assistant director of sales at Race-West Company, Clarks Summit, PA. In many cases, he says, “Families are smaller; people are buying 2- and 3-pound bags instead of 5-pound onion bags.”

Creating colorful, blended packs of red, yellow, and white onions is also piquing consumer interest, but packs with multiple varieties can mean more than just mixing colors, as some suppliers are sourcing varieties from international growers too.

“As the world gets smaller, we’re exploring French and Dutch products,” says Cutler, who believes that finding ways to make onions “exciting” will continue to drive sales and consumption.

Clearly, it’s working—according to the National Onion Association, red onions have posted double-digit growth in annual sales at retail, while overall fresh onion consumption in the United States jumped 15 percent in 2017 to almost 22 pounds per capita, according to the U.S. Department of Agriculture (USDA). This is the highest level since 2004, and the final tally for 2018 is likely to keep pace.

The global popularity of onions is also bolstering consumption as new arrivals to North America bring their cultural cuisine along with them, introducing traditional dishes and new ways to enjoy various types of onions.

Whether sliced, sautéed, roasted, caramelized, or pickled, onions continue to gain prominence from the realm of foodservice to the home kitchen.

And although onions are most used as an ingredient or side, they can ably occupy the center of the plate as an entrée.

The National Onion Association’s Layers of Flavor campaign supports such efforts, touting the healthful properties of onions as a solid source of vitamins C and B6, as well as fiber, folate, and manganese.

The association also continues its Onionista updates on social media, with both industry and consumer-facing news.