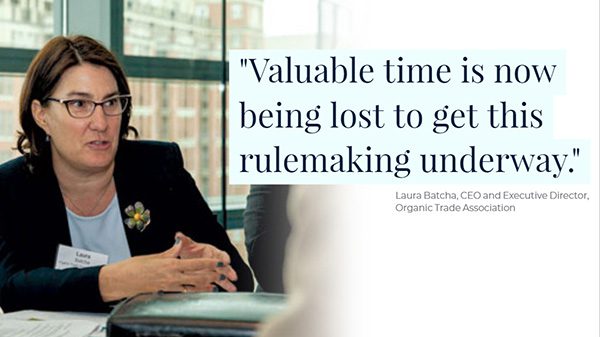 The organic food industry made great gains in the 2018 farm bill, but the ongoing government shutdown puts several benefits on hold.

However, organic integrity is not one of them, despite some consumer news reports.

Laura Batcha, CEO and Executive Director for the Organic Trade Association, said it’s important to emphasize that third-party certification that “provides verification and compliance for the organic sector will go on uninterrupted as well as the California state organic program, where much of our organic produce is grown.”

But she said the longer the shutdown continues, the more it will affect the organic segment. For instance, the National Organic Program investigations and complaints filed to NOP remain on hold until the government reopens, and a backlog could build up.

“The 2018 farm bill made significant gains for organic. It increased research funding for organic, but now 2019 research grants through the federally funding Organic Research and Extension Initiative Program could be delayed.”

She said the farm bill also requires that the U.S. Department of Agriculture create new regulations by the end of the year to increase oversight of the global organic supply chain.

“This was OTA’s top priority in the farm bill, but valuable time is now being lost to get this rulemaking underway,” Batcha said.

Both houses of Congress easily passed the 2018 farm bill in December, and President Trump signed it into law.