Heavy hitters like Chile, Peru, and Guatemala may dominate the export scene, but other countries are moving ahead with the goal of becoming viable trading partners and competitors in an increasingly crowded field.

Among the energetic up and comers is Ecuador, which is the world’s largest producer and exporter of bananas. In 2017 alone, Ecuador exported nearly 325 million boxes of bananas, of which the United States claimed 18 percent. Other exports include blueberries, pineapples, hearts of palm, passion fruit, papaya, coconuts, asparagus, mangos, plantains, and the increasingly popular dragon fruit. 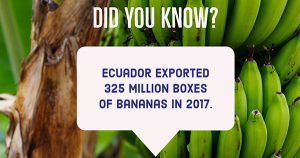 A number of U.S. companies are hedging their bets on Ecuador’s future, partnering with local growers or managing their own acreage for high-profile exports like mangos and asparagus over the last couple years.

Although heavy rainfall disrupted the season for some plantings last year, 2018 has shaped up rather nicely, with growers having plenty of robust offerings for export, including both conventional and organic fruits and vegetables.

Honduras is a big pineapple exporter, raking in over $40 million annually. Despite its political upheavals and violence in its capital, Honduras continues to expand its export horizons.

Fruit and nut imports to the United States were valued at over $350 million, while its major export — coffee — continues to rise. Other agricultural exports include bananas, plantains, cucumbers, and Asian vegetables, all of which are climbing.

Civil upheaval dragged Nicaragua down for decades, but the country has emerged from this period with the goal of moving forward. Coffee and sugar have traditionally been among its biggest exports, but these days fresh produce is occupying a more prominent role.

Among its offerings are bananas, melons, plantains, onions, Asian vegetables, and papaya shipments to a number of countries worldwide.

While the United States and Venezuela are its main export markets, one trading partner, Canada, its fifth-largest importer — reportedly wants a bigger piece of Nicaragua’s export pie.

Other countries being touted as future suppliers of note include Brazil, especially for mangoes, and Panama, where half of the country’s land is devoted to agriculture, growing many crops from coffee and cocoa to sugarcane, along with a few fruits and vegetables of interest to North American consumers like bananas, coconut, and papaya.