The industry’s own Produce Traceability Initiative (PTI) for food safety is poised to make a comeback, as it dovetails with the exploration of blockchain. 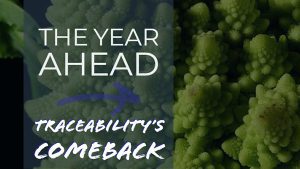 Ed Treacy, for one, welcomes the attention. The vice president of supply chain efficiencies for Newark, DE-based Produce Marketing Association believes there should be “more conversation, education, and awareness on traceability.”

“The outbreaks put more pressure on suppliers,” he says. “It forces companies to do something beyond the status quo, and it has rekindled interest to reinstall PTI, which should give it more momentum.”

“Traceability will certainly be a topic of renewed discussion due to the events of recent months,” says Scott Horsfall, chief executive officer of the California Leafy Greens Marketing Agreement, Sacramento, CA.

Currently, LGMA’s members are not required to use PTI, although they must have some sort of traceability system in place. Horsfall says LGMA will likely be more involved with PTI than it has been in the past.

The Yuma, AZ, and California romaine outbreaks have drawn attention to what Treacy considers weaknesses in the supply chain.

After the first outbreak, the FDA, addressing the PTI leadership council, attributed delays in tracing the source in part because the buy side had not implemented PTI as fully as the sell side, but also because sell-side data came to the FDA quickly but in a variety of formats, slowing its ability to interpret the data.

As a result, PMA is updating its PTI best practices document to include a preferred template for data formatting.

“This will make investigations more efficient,” Treacy says. “The objective is to clear companies and find the true source faster.”

To cap an eventful 2018, Blueprints asked produce suppliers and other experts to look into their crystal balls and weigh in on the trends and issues that will be most prominent in 2019. Karen Raugust is a freelance writer who covers business topics ranging from retailing to the food industry.