Pumpkins are the rock stars of fall, but many consumers have no idea how to eat a fresh pumpkin. One of the most common questions I get about pumpkins is whether you can eat a jack-o-lantern.

The answer isn’t whether you CAN eat one, it’s whether you SHOULD. (Spoiler alert: beyond roasting the seeds, a jack-o-lantern is a terrible, mushy, watery mess.)

By mid-November, most grocery stores in America have either donated their leftover pumpkins to the food bank, or are still hoping consumers will pick up some of the increasingly popular “wacky pumpkin” varieties like Blue Jarrahdale and fairytale for their Thanksgiving tablescapes.

But hold up, folks, most of those pretty pumpkins are actually good to eat!

My friend Heather brought some over and we hacked one apart, and cooked it in one of the trendiest kitchen gadgets out there, an Instant Pot.

Shout out to Four Seasons Produce for this excellent “Can I eat it?” chart for pumpkins. They offer it to retailers as a poster-size download, too! 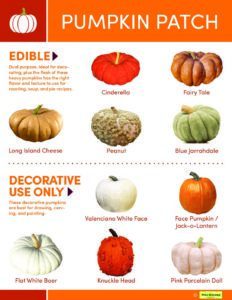