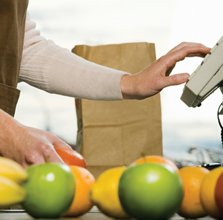 Infrastructure can pose another barrier. “Many alternative distribution locations do not have the appropriate refrigerated transportation or logistics infrastructure,” finds Minos Athanassiadis, managing partner at Fresh Link Group, a fresh produce industry advisory firm. Though none of these obstacles are insurmountable, they do require cross-industry cooperation and support.

Industry Awareness
A step in the right direction to not only increase awareness but get more fresh fruit and vegetables into alternative retail formats was the 2014 partnership between United Fresh Produce Association and NACS. The two organizations teamed up, forming a task force to identify best practices in developing a fresh produce supply chain for convenience stores and their management.

Jeff Oberman, vice president for trade relations at United Fresh explains: “We set up three working groups (Supply Chain, Merchandising, and Outreach) to identify challenges and solutions,” he says, adding, “We have retailers who have had success with fresh on the task force to share with others how it can work.” The groups are developing tool kits and will be presenting educational workshops at United Fresh and NACS trade shows later this year.

A Golden Opportunity?
Athanassiadis believes more fresh fruit and vegetables in alternative formats is a win-win, as both “consumers and growers-shippers will ultimately benefit from expanding channels of distribution.” He also noted that neither Trader Joe’s nor Costco carried fresh produce 15 years ago, and both Walmart and Target are still relative newcomers to the industry.

And while the expansion of fresh produce to convenience stores, dollar stores, and drugstores will add competitive pressure on traditional supermarkets, Athanassiadis believes grocery chains can hold their own “by offering unique varieties and emphasizing flavor over price.”

“Produce in many ways is in the driver’s seat,” asserts Balzer. “More and more retailers are figuring out that a great produce department is a great way to differentiate yourself from the competition.”

Produce sales at convenience stores reached $328 million in 2013, and NACS’s Lenard says this is equal to only about $1 per person a year compared to other sales categories. “That screams opportunity to me,” he says. Perhaps the United Fresh-NASC task force’s efforts will help usher in change to dramatically increase fresh produce sales over the next five years. “Everything is changing,” Lenard points out, “and if you don’t change, you will be left behind.”

Irene E. Lombardo is an award-winning writer/editor with more than thirty years experience in the financial services industry.